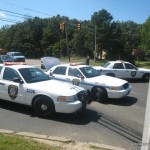 JUST IN: Police have just arrested the thief who stole the Pushkah from the Exxon station, as posted here on TLS. A local resident who walked in to the station during the ordeal as was shown the video surveillance footage of the suspect. The resident identified the man, and notified the police, who immediately tracked him down.
U/D 2:39 p.m. The thief has been issued a summons and released.