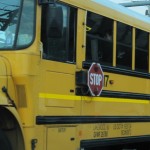 Assemblywoman Connie Wagner (D-Bergen) is pushing legislation that would augment criminal background checks for school bus personnel to include all adults given responsibility for the safety of school children, closing a loophole that has left bus aides free from scrutiny.

“This is about protecting our kids and reducing the liability on school districts. If bus drivers must be subjected to criminal background checks, so should the personnel riding on the bus and interacting with our children,” said Wagner. “A bus driver must remain in their seat while the vehicle is moving, while a bus aide is free to roam the bus at all times. It is just common sense to make them undergo the same scrutiny as the driver.”

The measure (A-4030) also would enhance penalties against any employee found tampering with a school bus’ on-board monitoring device.

Wagner said the changes were spurred in part by last year’s arrest of a South Jersey bus aide on allegations that he had repeatedly molested a young girl. While the accused did not have a criminal record, Wagner said the incident highlighted the loophole that exempted bus aides from the background check requirements.

The “School Bus Safety and Child Protection Act” would clarify current law by requiring bus drivers and aides in both public and charter school districts – as well as for any school which receives public funding for busing – to undergo criminal background checks prior to employment; private and parochial schools would be fully authorized to conduct similar checks on their bus personnel. Any employee accused of committing a disqualifying offense would be suspended until the case is resolved – with a conviction or other admission of guilt resulting in immediate termination.

“School bus safety is about more than just making sure buses are inspected and drivers are properly skilled. It’s about making sure that all those involved in transporting our children have their best interests at heart,” added Wagner. “At the end of the day, parents should have the peace of mind knowing their children are in the best of hands while traveling to school.”

The bill also would tighten the rules on school bus monitoring. School districts that have cameras to monitor the on-board activities on its buses would be required to randomly view the recordings at some point during the school year. Tampering with an on-board monitoring device would be a fourth degree crime, punishable by up to 18 months jail-time and fines of up to $10,000, or both.

Wagner hopes the measure will begin making its way through the legislature as soon as the Assembly reconvenes. TLS.