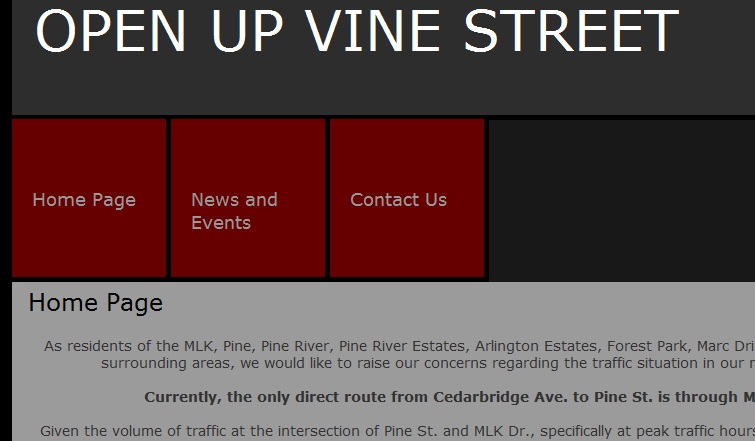 As the Township considers opening up Vine Street from Pine Street Street to Cedarbridge Avenue to alleviate MLK traffic, some Vine Street area residents grouped together to form an online petition asking the Township to move ahead with their plans.

The following is the contents of the petition:

To Whom It May Concern:

As residents of the MLK, Pine, Pine River, Pine River Estates, Arlington Estates, Forest Park, Marc Drive, and surrounding areas, we would like to raise the concerns regarding the traffic conditions impacting our neighborhoods.

Currently, the only direct route from Cedarbridge Ave. to Pine St. is through MLK Drive with Route 9 as an alternative route to get across town. Considering the tremendous volume of traffic at the intersection of Pine St. and MLK Dr. and the intersection of Pine Street and Route 9 , specifically at peak traffic hours (8:30-9:30 AM, 1:30-2:30 PM, 3:30-4:30 PM), we find ourselves spending a great deal of time caught in
traffic.

Furthermore, the heavy two-way traffic on Pine Street creates a dangerous intersection at which many pedestrians, including small children, are forced to dash across when there is a break in the flow of traffic. While the township has a stationed crossing guard at this intersection from 1:30 -2:30 in an effort to alleviate this unsafe situation, the overall traffic conditions at these intersections remain intolerable.
Additionally, due to the numerous developments in the area in varying stages of completion we expect a sharp increase in the number of residents which will be moving into the area. As the population in the area increases, these traffic conditions will become an even more pressing issue.

As an effective solution to alleviating some of these traffic issues, in addition to the traffic light that is slated to be added to MLK, we propose opening up Vine Street as an alternative route running from Cedarbridge Avenue to Pine Street. Opening Vine Street will create more traffic patterns which will ease the congestion, and will improve the traffic conditions impacting our neighborhoods.

Thus, we respectfully request that the Township act expediently and implement a form of the proposed plan as set forth above. We thank you in advance for your understanding and cooperation. View the petition here. TLS.