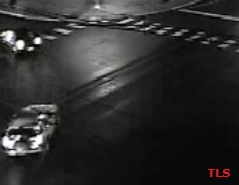 VIDEO SURVEILLANCE: Lakewood Police this afternoon released video of the suspect vehicle involved in Sunday’s hit and run which left a girl in critical condition.

Traffic and Safety Officer David Silberstien tells TLS the video is being enhanced by the Ocean County Prosecutors office in order to obtain the plate number from the vehicle.

The vehicle is a light colored 2006-2007 Jeep Liberty, as earlier determined by Silberstien based on evidence from the scene. The vehicle, which has a tire on the back, could be seen entering the bottom left of the video screen at the 7 second mark.