Video: Paper Wasp Nest The Size Of A Basketball In Brookhill 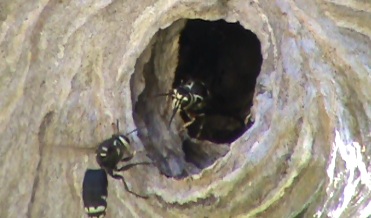 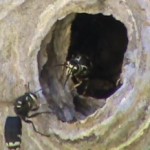 VIDEO of a Paper Wasp nest the size of  basketball, near a Brookhill resident’s front door. The nest, which can contain hundreds – and perhaps thousands – of Paper Wasps, started off the size of a baseball, the resident says. Paper wasps are 3⁄4 to 1 inch long wasps that gather fibers from dead wood and plant stems, which they mix with saliva, and use to construct water-resistant nests made of gray or brown papery material.

The wasps secrete a chemical which repels ants, which they spread around the base of the anchor to prevent the loss of eggs or brood.

Unlike yellowjackets and hornets, which can be very aggressive, polistine paper wasps will generally only attack if they themselves or their nest are threatened. Since their territoriality can lead to attacks on people, and because their stings are quite painful and can produce a potentially fatal anaphylactic reaction in some individuals, nests in human-inhabited areas may present an unacceptable hazard.