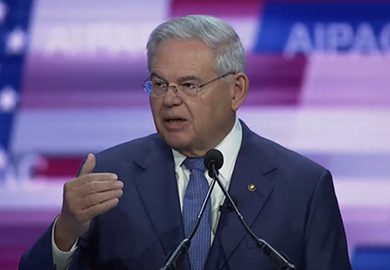 Below are the Senator’s full remarks as delivered:

“Good morning! There may be one or two other things happening in the world, both here and in Israel, making headlines today, but I think this is the most important event happening right now for the future of U.S.-Israel relations.

Every year I stand at this podium, I’m proud to see a room full of advocates and friends. And I especially want to recognize my dear friend, a great New Jerseyan, your steadfast leader and all-around mensch, Mort Fridman. He’s done a fantastic job for AIPAC. Mort is just one of the hundreds New Jerseyans I’m proud to see here today. You keep the U.S.-Israel relationship Jersey strong, so welcome!

So make no mistake: You will never see Bob Menendez speaking to an organization that foments bigotry in any form. I am always proud to address AIPAC Policy Conference. I am always honored to stand on this stage. And that’s because I know the people here today always stand up against hate.

This organization does not foment hatred or support bigotry. On the contrary, this organization has worked painstakingly for years to bring people together. This organization stands on the side of those advocating justice, dialogue, peace, and the right of all people to live with dignity. And if anyone from any political party thinks otherwise they should take the time to come themselves instead of castigating from afar!

Here’s what I know. You are the backbone of a strong U.S.-Israel relationship rooted in our shared values and common dreams. And I stand with you against the many forces that seek to undermine the U.S.-Israel relationship and even Israel’s very right to exist. Now, many of you have heard this before, but I believe in three fundamental truths that bear repeating today:

One: The security of the United States is strong when Israel is strong. Two: The Jewish people have a right to live in peace, security, and prosperity in the indisputable homeland of their ancestors. And three: Israel has a right to defend herself, and the United States will always ensure she has the capabilities necessary to protect her people and her borders.

Now, I won’t pretend that from time to time, my colleagues and I may disagree on how we confront some of our challenges. But there is no disagreement on this: the bond between America and Israel is unbreakable and ironclad.

Unfortunately, every year we come together, we find no shortage of threats imperiling Israel. To its South, Palestinian Islamic Jihad continues to threaten innocent Israeli civilians. No country on earth should be expected to stand by as a terrorist organization continues to attack its citizens. In Lebanon, Hezbollah has solidified its grip on the cabinet and continues to threaten Israel’s security. And on its Northern border with Syria, Iran and its proxies enjoy the blessing of both Bashar al Assad’s murderous regime and the backing of Russian air support as they expand their footprint and inch ever closer to Israel.

The Israeli people have witnessed the human cost of this conflict firsthand, from the brave IDF soldiers who defend Israel’s northern border to the health care workers who treat injured Syrian civilians in Israeli’s hospitals. We must use the full weight of American diplomacy to bring an end to the strife in Syria, alleviate the unimaginable, devastating human suffering and ultimately create greater stability for Israel and the broader region.

Here’s another undeniable fact. Despite the economic constraints placed on Iran, this regime refuses to abandon its campaign of terrorism and its sponsorship of proxies fixated on Israel’s destruction. Just as disturbing, today Iran’s breakout time to a nuclear weapon is shorter than it was when we gathered here just one year ago. I have said it before and I’ll say it again: we must never, never, never, ever allow Iran to become a nuclear-armed power. Never.

The question is, how do we achieve that goal? As the principal architect of so many of the U.S. sanctions imposed on Iran, I know they are among our most effective tools. But here’s something I also know. Maximum sanctions pressure on its own is a tactic, not a strategy. We need a strategy—one that uses diplomacy to ensure Iran has no pathway to nuclear weapons.

As some of you may have heard, I am working with Senator Lindsey Graham of South Carolina on a plan to signal bipartisan support for a concrete diplomatic strategy. We must find a way to get Iran back to the negotiating table. We must be willing to use the right economic and diplomatic levers to engage Iran in a serious dialogue about its nuclear weapons program, including its ballistic missiles. We must confront Iran about its support for terrorism in the region. This challenge demands that we restore the power of diplomacy and harness America’s unique ability to unite nations in common cause.

Senator Graham and I have been talking with our European partners about a multilateral strategy to get Iran back to the table and advance three clear goals: no nuclear weapons, no threatening intercontinental ballistic missiles, and no support for terrorism.

We must engage Israel and our other Middle East partners to forge a new path. As everyone in this room is well aware, a nuclear-armed Iran would pose an unacceptable existential threat to Israel and set off a dangerous arms race in the region.

Senator Graham and I believe there may be a path to a regional nuclear energy program that includes both Iran and its Gulf neighbors, and by design, is explicitly for peaceful purposes. A nuclear fuel bank administered by the International Atomic Energy Agency—with U.S. veto power—could prevent misuse and end any pathway to a nuclear weapon.

It would end the risk of a nuclear arms race and stop nuclear proliferation not just by Iran but by its neighbors. And given that chance to have sanctions relief in exchange for verifiable progress in those key areas—no nuclear arms development, no intercontinental ballistic missiles, no money for terrorism—Iran would either have to embrace a real pathway to peace or expose its true intentions. And in doing so, galvanize the rest of the world with us.

Now to those who argue we must press forward with sanctions alone, I only say this. The threat of conflict is real. The stakes could not be higher. And we cannot just cross our fingers and hope Iran changes its behavior. We must find a tangible diplomatic path, away from escalatory attacks that threaten the United States, our assets, and our allies. We cannot let heightened tensions and misunderstandings lead us into war, the costs of which the American and Israeli people know all too well.

Sadly, Iran is but one of many threats facing Israel. Whether it is the demonization of Israel by certain entities at the United Nation, or the isolation promoted by the grossly misguided BDS movement, it is up to all of us to stand up and speak out against anti-Semitism in all of its forms.

That’s why I condemned the UN Office of the High Commissioner for Human Rights for issuing a blacklist of organizations—including American companies—for doing business with Israel. It speaks volumes that they remain fixated on Israel while ignoring the atrocities committed by member states like Venezuela and Cameroon. Together we must ensure the letters BDS are seen for what they are—bias directed solely at one people and one country by those who should know better.

There’s no question we come together at a time when anti-Semitism is on the rise worldwide. Too many Jewish communities right here in America have lost loved ones in violent acts of hate. We know that nothing can bring back the lives taken just weeks ago in Jersey City or last year in Poway or the prior year in Pittsburgh.

I will not be silent. I will continue to stand up for the right of Jews to live peacefully in their communities, from Jersey City to Paris to Jerusalem and beyond. In this climate, we must remember there have always been voices on the far right and the far left who seek to castigate Israel and divide those who stand with her.

We cannot let them divide us. We cannot be hoodwinked into fighting with each other when we should be fighting in common cause—for security, for democracy, for our values and for human rights. We must remember that diversity is our strength, and our capacity to build solidarity our greatest weapon. And we must remember why we are pro-Israel—a position I’ve always believed is derived from the better angels of our nature.

Hope over fear. Democracy over despotism. Human rights over hatred. These values make the U.S.-Israel relationship strong. These values keep bipartisan support for Israel alive. And these values sustain a partnership between two democracies that has spanned multiple Presidents, Prime Ministers, congressional majorities and Knesset coalitions.

As usual, I am most inspired by the young people who are here today. So many of these young people encountered the ugliness I mentioned earlier on your college campuses—and yet you continue to stand up for what’s right. When I was a young man, I drew inspiration from a great leader named Robert F. Kennedy, who once said, “Moral courage is a rarer commodity than bravery in battle or great intelligence.”

To those students, I ask that you continue to display moral courage. Continue to lead by example. Continue to stand up for truth, justice, and equal rights. Because, as Bobby Kennedy also once said, “Each time a man stands up for an ideal, or acts to improve the lot of others, or strikes out against injustice, he sends forth a tiny ripple of hope, and crossing each other from a million different centers of energy and daring, those ripples build a current that can sweep down the mightiest walls of oppression and resistance.”

So to all the young people here today. Never forget that each of you has the power to create a tiny ripple of hope. And that together, these tiny ripples of hope can grow into waves of powerful change. Waves that can build into a tsunami of hope that I know in my heart will carry the U.S.-Israel relationship forward for generations to come.