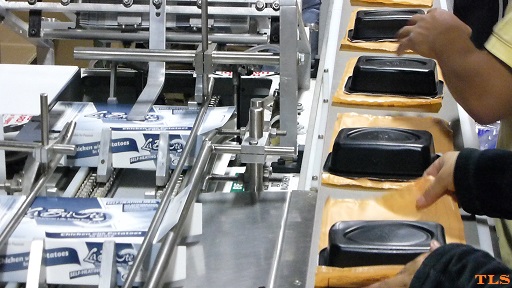 VIDEO: Jewish U.S. Troops stationed around the world for Passover, will have a taste of the Holiday after all – thanks to the scrumptious hot meals packaged by LaBriute Meals, based in Lakewood.

You’re probably wondering why we say ‘hot meals’ – how exactly are they shipping hot meals thousands of miles away?

LaBriute, the contracted Kosher for Passover food supplier for the U.S. Military, packages its meat dishes with a special patented heating bag which when mixed with the enclosed sodium water pouch , provides an instant 200 + -degree heating element, thus giving Troops a fresh hot meal straight out of the box – military style.

But chicken and beef isn’t the only thing the Troops will be eating on Pesach.

As you’ll see in the exclusive sneak-peak TLS video of the operations, inside their individually-packaged boxes, is also small packets of special Pesach foods including Matzah, fish, macaroons, nuts, nosh and other specialty items fit for Pesach.

After packaging the Pesach meals, the boxes are then loaded up onto tractor trailers and distributed to the Jewish troops world-wide. Some of those destinations include Afghanistan, Iraq, Kuwait, Al Salem and Qatar. Even Navy Seals on the USS Carter, USS Green Bay and USS Hary Truman, celebrate their Pesach with the Kosher meals.

“It’s a great feeling to be able to provide Kosher foods to our Jewish brethren out there serving and protecting our Country,” says Vice President of Sales and Marketing and COO Abe Halberstam.

And unlike some airline-style meals, these are real, nutritious and tasty foods – as evident by the dozens of thank-you letters which cover the walls of Halberstam’s Lakewood office.

During Hurricane Sandy, LaBriute – which also serves the Red Cross, FEMA and NY OEM – saved the day. When hundreds of thousands were left without a home or place to stay, LaBriute was ready, and shipped out truckloads upon truckloads of the ready meals – which due to its packaging technologies have a fresh shelf life of several years.