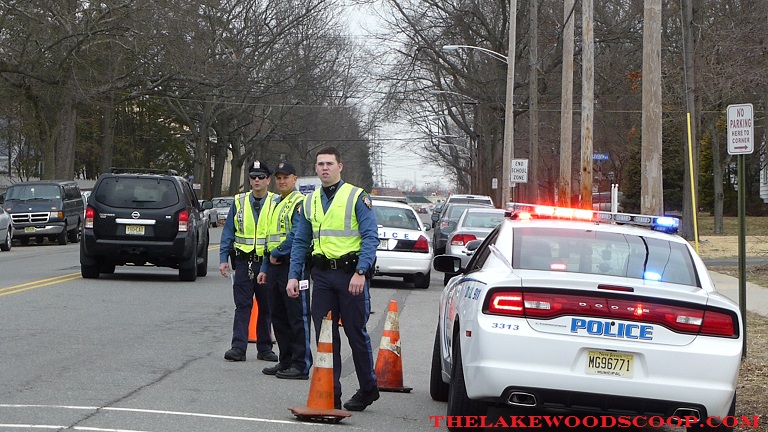 In an effort to combat the growing number of pedestrian-related motor vehicle accidents, the Lakewood Police Department launched a new program this morning aimed at improving awareness among drivers and pedestrians about their shared responsibility for safety.

As a plainclothes Lakewood Police Officer posing as a pedestrian attempted to cross a Clifton Avenue Crosswalk, another plainclothes Officer – with a radio in hand – watched.

So when motorists failed to stop for the officer standing in the roadway, the other officer radioed in the car to waiting officers on the next block. Those vehicles were then stopped and given a warning, along with a card detailing the violation they’d just committed.

In one particular incident, captured on the TLS video, a motorist can be seen driving around another motorist who had stopped for a pedestrian, and came within a couple of feet of the man crossing the road.

The violation for not stopping in for a pedestrian in a NJ Crosswalk, could be 2 Points and a fine of $200, among other penalties. [SEE FULL CARD HERE].

“Pedestrian safety is an issue that affects our entire community; young and old, drivers and walkers, in the day and at night,” Police Chief Rob Lawson told TLS. “Many avoidable injuries and fatalities occur as a result of inattentiveness of either the driver or the pedestrian. The roadways should be safe places for everyone regardless of their transportation mode.”

In the last year, over 100 pedestrians were struck by vehicles in Lakewood, a Lakewood Police Officer on the detail told TLS.

Over the next few weeks, the Police Department will be conducting several more of these ‘warning’ details, before actual summonses are issued, police said.

“Our new Pedestrian Safety Initiative program focuses on educating our citizens on the perils facing pedestrians and how they can help make the road a safer environment for those traveling by foot,” Lawson said.

“In addition,” says the Chief, “pedestrians must obey pedestrian signals and use crosswalks at signalized intersections.”

“By working together, we can all make our streets safer.” TLS.