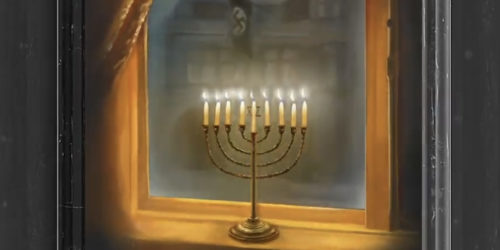 [From our archives] Chasoif: The Prayer of the Lights. The painting Yoel Judowitz created in this video was inspired by a famous historical photo taken by a Jewish woman in 1930’s in her home in Germany.

Across the street was the Nazi headquarters. She took the photo because she believed the Jewish symbol of light would outlast the Nazi symbol of darkness.

Rachel Posner snaps a photograph of her family’s menorah set up on a windowsill. In the background, directly opposite the menorah, is a building draped with a Nazi flag.

The photo is astonishing. The contrast takes your breath away.

But we needed more.

So that we can know, so our children can know,
That no matter the darkness that surrounds us,
No matter the depth of hatred and evil,

We will carry that flame,

Today, tomorrow, and the day after,
Until the entire universe shines with a light that never fades.

A Chanukah of Light and Inspiration to all.

This songwas produced this week:

Thank you Avigail Eisenstadt for the beautiful piano outro.