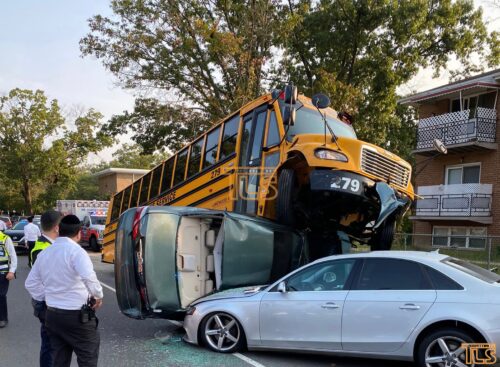 The driver, whose name has not yet been released, was issued tickets for Reckless Driving, and Improper Passing.

As first reported by TLS yesterday, the bus driver allegedly cut off another vehicle making a left turn, causing him to lose control of the bus, striking multiple vehicles.

Police say the school bus skidded approximately 90 feet in the ordeal. The bus finally came to a rest when it flipped a vehicle, landing on top of it. Five vehicles were involved in the accident, three of which were parked cars.

A total of 15 students were on board ranging from 14-17 years old, police said, none of whom were injured. They all escaped through the fire escape door, which police say was about a foot off the ground due to the angle of the bus.

TLS has also learned that the bus’s dashcam video was not operational at the time. Police say it was not working since May.

There is no word yet if the driver will be terminated.