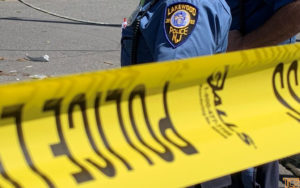 Lakewood police officers made an arrest in connection to the March 26th armed robbery that occurred at Taylor’s Pharmacy.

According to police, an unidentified male walked into Taylor’s Pharmacy located on the corner of Second Street and Madison Avenue on March 26 brandishing a semi automatic hand gun and demanded money from the register. A store employee walked over to the registered and handed the unidentified male $130 cash after which the suspect fled the building on foot. A search of the area by responding officers was initiated, however, all efforts were unsuccessful.

​The suspect was described as a Hispanic male, short hair, about 5’10, with a tattoo in the area of his face or neck. He was last seen wearing a black hat, black jacket, black shoes and black sweatpants. In addition the suspect was reported to have a red and black bandanna covering the lower half of his face.

During a three week long investigation conducted by the Lakewood Police Department Detective Bureau, an unidentified male, who matched the suspect’s description, was observed back in the area of Second Street and Madison Avenue early yesterday afternoon. A surveillance detail was then initiated by Detectives Patrick Kearns and Tyler DiStefano. A short time later, they observed the suspect, identified as 31 year old Elioenai Aguinaga of Lakewood, engaging in the distribution of CDS with 39 year old Krzysztof Slusarz of Lakewood Florida. Both were arrested and transported back to headquarters.

Krzysztof Slusarz was charged with CDS Violations and released on a summons pending a future court date.