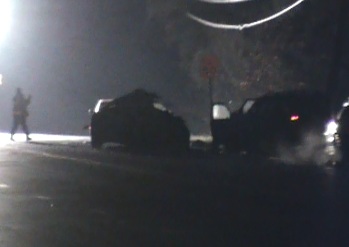 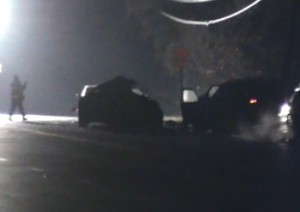 PHOTO: [UPDATED SUNDAY MORNING] Two are dead and two others injured in a serious MVA this afternoon. The crash occurred on Cedarbridge Avenue at about 3:30 PM and involved 4 vehicles, officials tell TLS.

EMS responded to the scene and extricated two patients from one vehicle. They were both pronounced dead.

An official tells TLS the driver and passenger who were killed, were both young.

Two other drivers were transported to Jersey Shore Medical Center with serious injuries.

A 2008 Black Honda Civic (driven by Enrique Bravo-SantaMaria Age 20 from Lakewood) and his front seat passenger (Giancarlo Miranda from Brick Age 19) were traveling West on Cedarbridge Avenue when the vehicle lost control and crossed over the double yellow lines into the oncoming lanes of traffic and struck a 2009 Red Subaru (driven by Leslie McCusker age 48 from Asbury Park) which was traveling eastbound on Cedarbridge Avenue, according to the Traffic & Safety department investigating the incident.

The Black Honda continued to travel in the eastbound lanes and struck a 2011 Ford Escape Head On (Operated by Mark Kinmon Age 44 from Howell, with his wife in the front seat as a passenger (Karen Kinmon Age 45).

The fourth vehicle which tried to avoid the impact, was a 2007 Honda driven also eastbound by (Wisnu Kusuma from East Brunswick Age 37) wound up leaving the travel portion of the roadway and striking several small trees.

The Kinmon’s were taken to Jersey Shore Medical Center for their injuries. Leslie McCusker and Wisnu Kusuma refused medical treatment at the scene.

The two young men in the 2008 Honda Civic died from their injuries sustained in the crash. The front seat passenger GianCarlo Miranda was pronounced at the crash scene at 3:21 PM.

The Driver Enrique Bravo-SantaMaria was transported to Kimball Medical Center and pronounced dead at 3:26 PM.

The roadway was closed to traffic and was detoured for approximately four hours while the investigation continued by Traffic Safety Officers Erik Menck and David Silberstein. TLS.