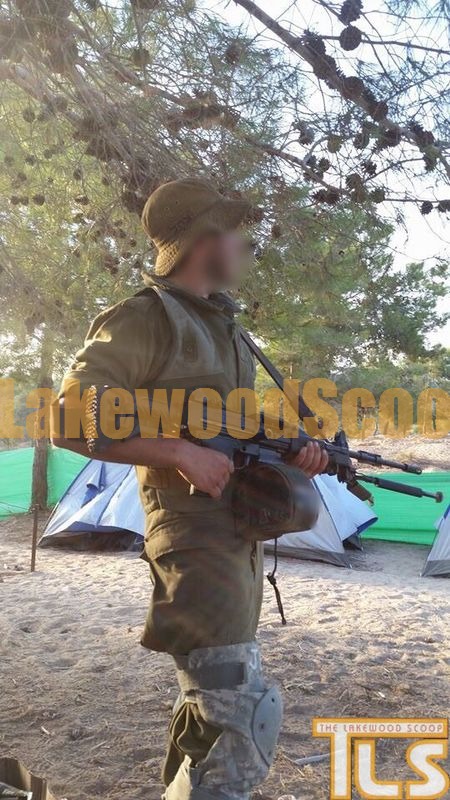 [The following letter was submitted exclusively to TheLakewoodScoop.com (TLS-28) by a Lakewood resident currently serving in the IDF] As I started to write this letter, another “red alert” siren started ringing and we had to run to the shelter. We waited a few seconds, then we heard the boom of the miraculous “iron dome” intercept another one of hamas terror rockets. We all looked at one another realizing it’s probably going to be another sleepless night running to the shelter.

One of the hesder soldiers started saying a perek of tehillim, and even the non-religious soldiers joined in. Everyone started checking their phones to check if their family and friends were safe and one guy started reading off the names of the soldiers that were killed. Everyone was anxious to hear the names to make sure they didn’t know them.

Suddenly, one of the soldiers started crying realizing that his cousin was killed in battle.

The soldier was almost done reading the list and I breathed a sigh of relief, until I heard the name “Max Steinberg” הי”ד, and I felt as if someone had just hit me in the stomach with a sledgehammer.

Max and I stayed at the same hostel when we first got to Israel. We used to hang out on the weekends when we were off base, and now he was gone forever because some terrorist blew up the APC he was traveling in. I had a small comfort knowing he died AL Kiddush Hashem, and that he was in a better place now.

The sirens stopped and our commander told us it was safe to leave the shelter. I left the shelter a different person than when I had run in. I would never get to see my friend again, never hear him tell a joke and never see him smile again.

One of my buddies came up to me gave me a hug and said to me in English, “I’m sorry for the loss of your brother.”

All the “lone soldiers” (soldiers without family in Israel) are like one big family, we always have each others’ backs.

The rest of the night we didn’t have any sirens, thank G-d.

When we woke up in the morning, we received more bad news. A former commander of mine, Rami Kchalon Z”L got hit by a grenade and was killed. I heard he stood up to protect the soldiers around him. It was another powerful blow. To me he wasn’t just a commander, he was like a brother, a friend and a leader. He always helped me out, whether it was giving me an extra day off or just buying me food (because he knew we didn’t receive a lot of money). He always did it with a ready smile and a hug. It was a really powerful shock to me. I was starting to recuperate from my shock of my friend and now my commander.

I broke down crying, and my platoon commander came over and hugged me and told me I can take off till the afternoon and if I needed to speak to someone he would be there for me.

So now I’m back in my room with time to think, and wanted to finish writing the letter I started.

I remember growing up in Lakewood during the second intifada. As a kid, I didn’t always hear about every terrorist attack, but when I did, I felt sorry for the victims, said some tehillim, and forgot about it the next day. “One dead, two wounded – wow, that wasn’t even a big terrorist attack,” I thought to myself. I thought wounded or injury would just require a bandage and you go on with life.

My first time in Israel was in 2006, during the second Lebanon war, and for the first in my life I saw how an entire country comes together to support the soldiers and mourn the loss of life. Erev Tisha B’av 2006, I had the honor to be amongst thousands of of people from all different backgrounds to escort “Michael Levin” (an American lone soldier) to his final resting place. For the first time in my life I felt a loss of life. It wasn’t just another statistic of a person being killed in the “middle east conflict”.

When I got back to America, I promised myself I would go back to israel to help defend our nation. A few years later, I made good on my promise and came back to Israel, and was drafted into tzanchanim (paratroopers).

Towards the end of our training we were called to chevron to help search for the 3 kidnapped boys hy”d. We spent sleepless nights looking for them.

We were taking a break from the hard work when their bodies were found, and a unified cry of sorrow broke out. We were optimistic that they would be found alive.

We were sent back to base immediately to finish up our training on urban and tunnel warfare. Two and a half weeks later, we were sent to the nearby area because we weren’t fully qualified to go in.

I just got called back by my platoon commander, and received new orders that we are moving to the border now. May Hashem watch over us and bring Moshiach and peace to the world.

Signed ,
A lone soldier from Lakewood.
P.S. Thank you for all you Tefillos and support.