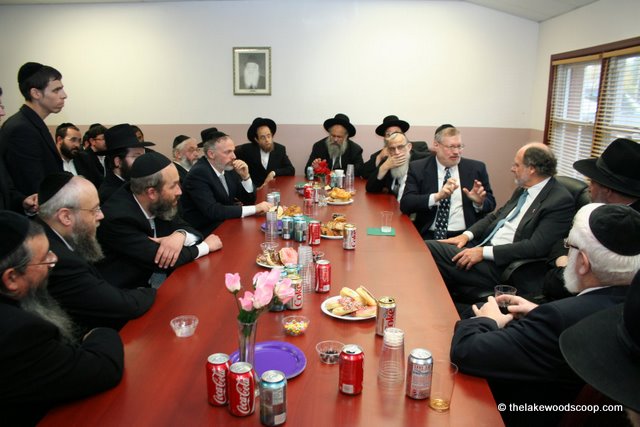 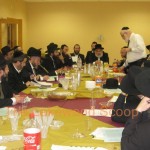 (Photo of meeting-click to enlarge). In a strong showing of unity and purpose, 40 leaders of local mosdos met with Michael Inzelbuch, attorney for the Lakewood Board of Education, at last night’s Igud meeting, which was held at Bais Tova. Mr. Inzelbuch delivered some good news. He assured the Igud that the BOE will return most, if not all, of the $2 Million it previously diverted from the mosdos, and that the Board has already taken corrective action on this. As reported and posted here, the Igud last week, in a strongly worded letter, demanded the return of these Title 1 Stimulus funds. The Igud has claimed that these funds were improperly diverted from the mosdos’ (nonpublic) 70% share of this year’s $5.9 Million Stimulus Title 1 grant “without our knowledge, without our input, and certainly without our approval.”

Mr. Inzelbuch also pledged that the BOE is working to provide “written answers” to the dozen  questions posed in the same Igud letter. Among the concerns raised by the Igud was the BOE’s award of numerous single source, no bid contracts to Catapult Learning for provision of special education and related services. The Igud has claimed that the monopoly given to Catapult results in over-inflated program costs being charged to the District, as well as under payment for teachers, therapists and other special education professionals employed by Catapult. As well, the Igud questioned the arbitrary manner in which the District distributes Title 1 and IDEA funds to both the public and nonpublic school student populations. The Igud pointed to significant year-to-year fluctuations in the ‘proportionate’ public/nonpublic ratios as evidence of funding irregularities in what should be a stable, formula-driven allocation process. Another concern expressed in the Igud letter is that only 254 IDEA-eligible nonpublic school children in the kehilla mosdos will receive IDEA help this year out of a total of 3,011, a mere 8.4 percent, according to the BOE’s own figures. “What will happen to the other 2,757 children with disabilities (91.6%)?” the Igud wants to know. And “who will decide which 254 of the 3,011 Lakewood nonpublic school children with disabilities will receive services, and which will be denied?” the Igud wrote. Various other similar concerns remain as yet unanswered.

Title 1 assists academically at risk learners to attain and maintain grade level proficiency. IDEA helps children with learning disabilities to meet their individual special needs. Children enrolled in public or private schools are both eligible for help under these federally-funded special education programs, because the beneficiaries are the children, not the schools.

The Igud is waiting to receive the BOE answers before deciding on further action. TLS.