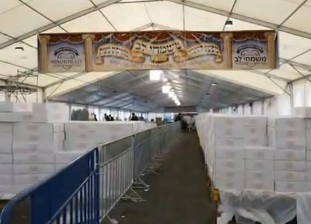 [VIDEO] This evening, Motzei Taanis Esther, an elegant reception will be held for the organization Mesamche Lev, with a lavish buffet, and entertainment.Mesamche Lev was established in 1971 by Rabbi Zalmen Ashkenazi ztz”l, a very noble and compassionate individual who took upon himself to still the pain and shame brought on by poverty, hunger and destitution rampant in the streets of Yerushalayim. His goal: to take off a chunk of the burden of life for the many poor and destitute living in sorrowful poverty, with special sensitivity towards the needs of widows and orphans. The tzedakah is given with true ahavas yisroel and mesirus nefesh– and never is anyone turned away.

From month to month and from year to year, the list of indigent grew longer and more funds needed to be collected and dispensed. Rain, sleet, sub-zero temperatures, or illness never deterred Rabbi Ashkenazi ztz”l from pursuing his vision. He worked with unrelenting zest and passion that never diminished in the course of 40 years until his very last breath – and saw Mesamche Lev expand into a world-renowned chesed empire with a yearly budget of nearly 6 Million dollars.