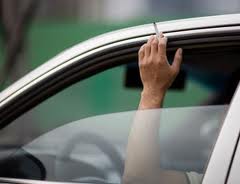 What do you do with your cigarette when you’re done with it while driving? Well one thing’s for sure, don’t throw it out of your car. A Lakewood motorist tells TLS he was pulled over on a local road and the cop tells him he was doing 50 in a 35 zone.

“I know I was going about 40, but I was not going to argue”, the driver says.

“Then he says he saw me throw a cigarette out of the window”, he relates. “He comes back telling me I gave you off for the speeding”, and then handed him a $230 summons for littering. TLS-MK.