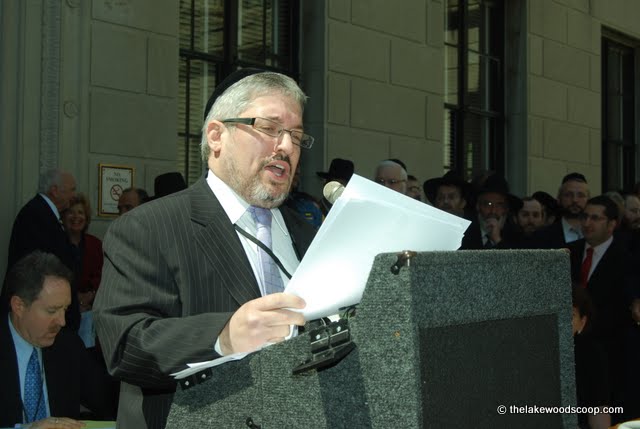 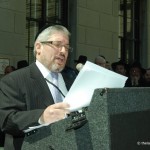 (Updated 4:35 p.m.) As you will surely read, today was a historic day in Trenton for School Choice, where the Opportunity Scholarship Act passed by a 6-0 margin. What was supposed to be a Rally and a Hearing became just a Hearing as it was moved from a Committee room inside the State House outside to the Rally area. The first time that anyone remembers that ever happening! As such, although I did get to testify before the Senate Economic Growth Committee, I didn’t get to read my speech that I was supposed to deliver at a Rally that didn’t end up happening.

I would like to share those remarks with you below, but before I do I would like to express my Hakoras Hatov to the Lakewood Roshei Yeshiva, Shlita and the Mashgiach, Shlita, who had the foresight and vision to realize how a large crowd at the event from Lakewood can only help the community and result in a tremendous Kiddush Hashem, which indeed it did.

I would also like to thank all of the participating Yeshivos and individuals who displayed Kovod HaTorah and adherence to Daas Torah by attending this Rally-Hearing.

And now my remarks that I was unable to deliver.

I would like to thank everyone for gathering here today for our united effort to achieve School Choice in New Jersey.

I would like to thank all of the people from the Lakewood community for coming out in such large numbers to support the Opportunity Scholarship Act.

I would like to thank the Igud Hamosdos of Lakewood for their role in planning the logistics and specifically Rabbis Yonason Sanders, Shlomo Katz, Yaakov Phillips, Meir Hertz, Menachem Spiegel, Yisroel Schenkolewski, and Yisroel Levi for all of their help, hard work and sleepless nights.

I want to thank E3 and all of my fellow members of the School Choice Coalition for working hard to bring this large crowd together and toiling tirelessly for the sake of the children in New Jersey.

Today we are here as part of a revolution. We can call it the Education Revolution, where parents and children are fed up with the status quo.

(TLS Editor: My apologies-the following has mistakenly been omitted).

For too long we have been complacent as children stay in schools that are not suited for them due to their inability to choose a better option.

For too long we have been silent as Parochial schools are closing due to parents having to remove their children due to their inability to afford the cost of tuition.

For too long we have allowed special interest groups to place the demands of their employees over the good of the children.

Now, I can’t begrudge anyone for doing their job to get all that they can for their members, after all that is why they are receiving $700 per year for dues.

However, I think the time has come to tell them don’t do it at the expense of our children.

Our children also deserve the best education they can get. Our children should have the right to receive an education at a school that their parents (not their School District) feels is best suited to educate them.

Ladies and gentlemen, the time has come for us to work extremely hard for the next seven weeks to make sure that the Opportunity Scholarship Act passes.

We need to assist Senators Lesniak and Kean in their heroic effort to find a solution to this problem. We need to support Governor Christie and Commissioner Schundler and ensure that their education reform ideas become a reality. And last but not least we need to help our children, and ensure that they get the best possible education.

In Hebrew the numerical value of the word Chai which means life is 18. The number 72 is four times life. In our belief we believe that nothing happens by chance. It is no small coincidence that S-1872 equals “Fo(u)r Life”. For the life of our children!

I would be remiss if I didn’t mention the name of a great man who had the foresight to begin this battle, and who was involved in it until his dying day.

Dan Gaby we are so sorry that you are not here with us today in body, but I am sure you are in spirit. Dan the battle continues and we won’t give up until we achieve the success you so valiantly fought for.