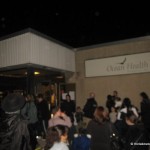 (TLS file photo of residents lining up for flu shots at the OHI office on 2nd Street) Five short months ago, fear of the swine flu gripped the state and the nation. Health officials warned that the flu season could be one of the deadliest in decades. The anxiety intensified when President Barack Obama declared a state of emergency. At a free clinic in Jackson, just days after Obama’s declaration in October, about 1,000 people were turned away after vaccinations ran out. Police were called in to disperse the crowd. “When the president comes on TV, saying it is a national emergency and people are getting sick — I can’t play Russian roulette with my child,” said Brick resident Stefanie Richards.

Absenteeism rose to more than 20 percent at some schools. County health departments couldn’t keep up with demand.

Medicine was rationed, with only those in high-risk groups afforded vaccine shots.

Fast-forward to today. A Feb. 13 report issued by the state Department of Health and Human Services indicated that swine flu activity during the preceding week was the lowest since last April, when it was first diagnosed in the region. Since Jan. 1, just two flu-related deaths have been confirmed in the state.

Did health officials overreact? No, they say, even though the spread of the illness has not been as severe as originally thought.

And they warn there is still a chance the swine flu virus, clinically known as H1N1, could come back with a vengeance. Some pandemics, including the Spanish Flu of 1918-19 that killed an estimated 50 million to 100 million people and infected about one-third of the world’s population, featured a deadly “second wave.”

“This particular wave is waning at this point. But just because it’s waning doesn’t mean that it is over,” said Dr. Peter Wegner, an infectious disease specialist at the University of Medicine and Dentistry of New Jersey in Newark. “The only thing predictable about influenza is that it is unpredictable.”

While the swine flu outbreak hasn’t been as severe as originally feared, it has, nonetheless, killed an estimated 17,000 Americans, including 42 in New Jersey, and infected 57 million more. Had it not been for the massive response to the pandemic, the death toll could have been far higher, health officials say. Read full article in APP.