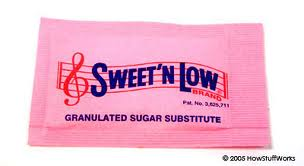 Using artificial sweeteners may set the stage for diabetes in some people by hampering the way their bodies handle sugar, suggests a preliminary study done mostly in mice.

The authors said they are not recommending any changes in how people use artificial sweeteners based on their study, which included some human experiments. The researchers and outside experts said more study is needed, while industry groups called the research limited and said other evidence shows sweeteners are safe and useful for weight control.

The study from researchers in Israel was released Wednesday by the journal Nature.

The work suggests the sweeteners change the composition of normal, beneficial bacteria in the gut. That appears to hamper how well the body handles sugar in the diet, which in turn can result in higher blood sugar levels. This impairment, called glucose intolerance, can eventually lead to diabetes.

Some experts who didn’t participate in the work urged caution in interpreting the results.

James Hill, an obesity expert at the University of Colorado, called the work good science. Still, overall, “I do not think there is enough data yet to lead to a definitive conclusion about artificial sweeteners and the body’s handling of sugar,” he wrote in an email.

“I certainly do not think there is sufficient evidence to conclude that they are harmful.”

But Yanina Pepino of Washington University in St. Louis said the results make a convincing case that sweeteners hamper the body’s handling of sugar by altering gut bacteria. And it adds to her belief that sweeteners and sugar should be used in moderation, especially by children, she said. Read more in Washington Post.