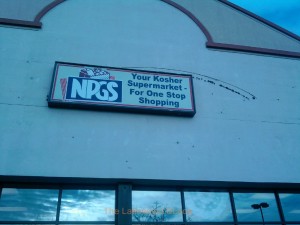 NPGS announced the following today: NPGS has been serving the Lakewood community for more than thirty years, with great prices, convenient locations, and advanced Kashrus.

NPGS began when Lakewood consisted of but a few hundred families, when there were no kosher supermarkets. It was hard to get basic Kosher products, especially in one location. As Lakewood grew, so did NPGS, first with one location in what was then the Shoprite Plaza, and then to 231 Main Street. A second location was opened in Jackson and the third location on James Street. The motto was always the same: Keep the prices as low as possible, don’t waste the consumers money with large expenses, sell products that have the highest Kashrus standards, and try to employ as many frum Yidden as possible.

As Lakewood expanded south, NPGS opened a branch in Southern Lakewood, in Seagull Square. Seeing that this fourth location was draining the ability to supply the stores with NPGS’s signature Shechita of meat and poultry, and keeping up the NPGS standards in four stores, NPGS has decided to cut back and remain strong in the three original stores.

NPGS intends on upgrading all of the stores with updated design, offering delivery service and superior customer service from all its locations. At the same time, NPGS intends on keeping the store fully fit for the very Choshuv and distinguished Lakewood community.

Thus, NPGS at Seagull Square will be closing on Friday, Rosh Chodesh Av. During the week, all customers will receive 20% off all purchases in the store (besides for sale items). There will be no returns on the purchases made during the week.

The 20% sale will include all fresh and frozen products, all groceries, baby items, baking supplies, paper and aluminum goods, toys, batteries and so much more.

NPGS thanks you for your business in the Seagull Square store and invites these customers and the whole Lakewood to the 3 magnificent NPGS locations. NPGS wishes to thank the entire community for all its support for so many years. BE”H, we should be zoche to see the coming of Moshiach.