Some Halachos On Chanukah 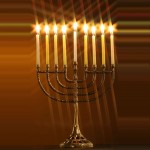 Please note: This article is for informational purposes only. All questions in Halacha, should – as usual – be confirmed with your Rav. Doing work within 1/2 hour of candle lighting: The Shulchan Aruch (Orach Chaim 670:1) brings down that women should not do work, while the candles are lit. The Mishnah Berurah also brings down that the same applies to men, according to the Maharil. The reason for this, is because maybe the lights would go out and she would be in the middle of her work, and then she would use the light of the candles for a prohibited use (Meor Ukehtzeah) . Some say that this only applies for the first 1/2 hour, that the candles are lit after “Tzays Hakochavim”(Mishnah Berurah).

The Levush brings down that there is another reason for women not to do work, because the days of “Chanukah” were set as days of holiday, and praise.

In order to show this, and because the miracle of “Chanukah” was brought out by the women, there are those that hold that one can not enjoy the light of the candles, even after 1/2 hour, they would hold then also not to do work the whole time that the candles are lit

Thus there is reason for women to prevent from doing work while the candles are lit, even till midnight, yet most retain from work as said above, the first 1/2 hour, unless ones Minhag is otherwise.

There are those that say it is a “Segulah” for women to retain from doing work, if possible, even the whole day. Some say that this only applies the first and last day of Chanukah (Baer Haytayv, Ben Ish Chai…)

There are those that don’t do any work at all, the first half hour (Rav Y.Y. Fisher Shlita, says this is the Minhag of Yerushalayim).

There are those that do work which is permitted on Yom Tov, like cooking, yet not sewing and washing clothing, ironing (S”HUT Kinyan Torah Part 7, 52). While some allow other house cleaning like washing the floor and cleaning the house (Luach Dvar Yom B’Yomo).

Everyone should go according to his Minhag.

When it comes to lighting the candles, the Mishnah Berurah(671:2:9) says that the wife does not light since she is Yotzay through her husband.

The M.B.(675:9) brings down the Sefer Olat Shmuel, that women and girls also are commanded to light, yet they are exempt by the men in the house.. However, if they do want to light, like when the husband is not home, she does light even with Beracha, since she is required to do this Mitzvah. And because any Mitzvah Asay Sheh Hazman Geramah, a women can make a Beracha on if she wants to do the Mitzvah. However, the girls in the house should not light with a Beracha, if there mother or father (or any other man/boy) is lighting in the house.

The Chidushei Chasam Sofer (Gemarah Shabbat 21:2) also explains why women and girls have the Minhag not to light, because in those days they used to light outside, and it was not proper for the girls to light outside, so they heard the Berachos from the door. Nowadays, even though we light mostly indoors, the Minhag still stands.

What type of simcha may one have ?

The Biur Halacha (O.C. 670:2), says one should have a lot of Simcha during the days of Chanukah (Simcha of Torah). He also goes strongly against those that go and play cards on Chanukah.

However, the game of Dreidel that a lot of people have the Minhag to play, is permissible.

Not only is it allowed, we find that the Chasam Sofer writes about this Minhag in his Sefer Haminhagim, and he himself used to play Dreidel with his silver Dreidel.

We also find by the Kloyzenberg Rebbe, that he writes that there is no problem here of “Meh Sahchayk Beh Kubiah”(gambling), because a father, with a son that is supported by the father, is no problem. Also, since on Chanukah we increase Ahavat Yisrael, that we become all one family, and thus we don’t care who wins or looses.

There are also hidden meanings in this game. One of them is that the 4 letters on the Dreidel represent the 4 powers that a person has in him:

Gimmel -> Gufani (Physical)
Nun -> Nafshi (Spiritual)
Shin -> Sichli (Knowledge)
Hay -> Koach Elyon that includes Ha kol.
There are 4 powers in heaven above, opposite the 4 Galut’s (Rome, Greek, Persian, Babylon), and they would end by the Moshiach = 358 = Gimmel, shin, nun, he. (Bney Yisachar, article 2, word 25)(I took the above from the Sefer Piskei Teshuvot)

He also brings out that in the times of the Greeks, when they forbade Torah learning, the Jews would pretend that they were playing games like this so the Greeks shouldn’t know that they were learning Torah.

The Chasam Sofer (on Yoreh Deah 233) writes that to make a day for rejoicing a miracle is a Torah commandment, how to rejoice (Hallel, Candles, Megilah) is Rabbinical. We don’t have meals like on Purim because on Purim Haman wanted to destroy are physical being, thus we rejoice with are bodies, on Chanukah Antiochas wanted to stop the learning of the Torah, which is on the Nefesh, thus we rejoice the soul with Hallel, praise and thanks. (Aruch Hs Shulchan 670:9)

There are those that say that even in a place where one is the only Jew in the city, there is still a need to light outside for Pirsumei Nisa, even when there are only gentiles outside. (Shut Hitorerut Teshuvah)

Where should one light his Menorah?

We find in the Gemarah Shabbat (21:2), that one should light outside of ones house, not in the public area, yet by the opening of his house (M.B.). Yet when there is a danger in lighting outside, one may light inside, preferably by the window facing the public grounds.

If so, why do most of the people nowadays light indoors?

There are many opinions, here are some of them:

Since we started to light indoors because of danger, people continued lighting indoors. (Itur-Chanukah). Why do we still hold this now?? So the Sefer Piskei Teshuvot brings down that just like by blowing the shofer, because of danger we blow after Shacaris, and not before Shacharis, the Minhag used to be, the same here by Chanukah.

Since Chanukah falls out in the winter season with rain, snow, cold, wind…and thus we can’t place the menorah outside, unless they are put in a glass case, this much the Rabanan did not request from us, also there is less of a Heker Mitzvah, in the glass case. We also don’t have to worry if only the people in the house see and not people outside. One should light the candles within a Tefach from the opening, or on the left side of the opening. (Aruch Hashulchan 671:24)

The Bnei Yisachar brings in the name of the Olalot Ephraim, that in the olden days the Chachamim lit outside to hint that Torah is spread to all the Jews from the Gedolim(Yefutzu Mayonahtecha Hachutzah). Nowadays, it is enough if we can stop our own household from going off the correct way, and it is much harder now to bring people off the wrong ways.

Thus we light inside with our family.

If one decides to light his candles in the house, he should make sure not to place the Menorahs all together, in order for there to be a Heker in how many one is lighting.

Rav Elyashiv brings down that if the window in front of the menorah, allows the light of the candles through, yet it gives a blurry vision of the light, it is still considered Pirsumei Nisa .

One must place the menorah at least 3 Tefachim above the ground, and best to be under 10 Tefachim, yet not over 20 Amos.

If one lives in a house above 20 Amos from the ground outside, and thus the window is higher than 20 Tefachim, since there is no Heker to those outside, one should light it opposite the Mezuza( Shar Hatziun 671:42)

There are those that say one should still light in the window, since people can see it from the ground (Pri Megadim), especially if there are other tall buildings close by.

The Shar Hatziun (671:34(brings down the Pri Megadim), that we must make sure that the flame is not above 20 Amos (or below 3 Tefachim), and we don’t look at where the Menorah is. There are still those that say that even if the Menorah is larger than 3 Tefachim he should not put it on the ground yet on some sort of small table (M.B. 671:26). While there are those that put it actually on the floor, with a nice cloth in between, in order to meet the requirement of the flame being between 3-10 Tefachim. (Shut Lehorot Natan vol.4 , 63) Read more in Torah Zone.