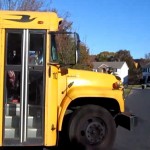 All bus routes vacated by Durham have been settled with the District, a BOE official confirmed to TLS. During a meeting last night with the Transportation Committee, the routes were reshuffled so that they could be serviced. Bus routes which were unable to be serviced by Durham due to the schedule change in the public sector, were given to other vendors who could service those times.

Durham, in exchange, was given routes which would work into their schedule.