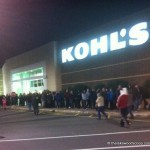 Retail sales broke records during Thanksgiving weekend, hitting an estimated $52 billion in stores and online and more records the National Retail Federation said Sunday. This year’s sales are up from $45 billion last year. A record 226 million shoppers visited stores and websites over Black Friday weekend, up from 212 million last year. The average holiday shopper spent about $400 this weekend, up from $365 last year.

Big Black Friday weekends aren’t always a sign of consumers’ confidence in the economy: The previous top weekend was in the depths of the recession in 2008. But this year’s holiday shopping was more of a splurge than a scrounge for cheap necessities.

More than half of the U.S. population — or 123 million people — plans to shop from the safety of their office or home computer chair on Monday, which is known for its online promotions.

The Monday after Thanksgiving used to be the first day many people had broadband access when they returned to their offices. Most people who have computers at their offices now have high-speed internet at home and likely their mobile devices, but retailers have stepped up the free shipping and other deals so much that consumers are now conditioned to keep shopping. Read more in USA Today.