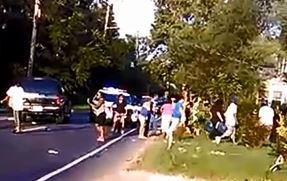 RAW VIDEO: [VIEWER DISCRETION IS ADVISED] The serious assault on the driver that fatally struck a pedestrian last Saturday, was captured on cell phone video, and has surfaced.

The video shows a chaotic and emotional scene before police arrive about 60 seconds into the video.

The video shows the attacker come from behind and assault the 26 year old driver moments after he exited his vehicle to check on the severely wounded woman.

A serious blow to the driver’s head left him apparently unconscious on the ground, just feet away from the road. He was flown to Jersey Shore Medical Center with serious injuries.

[Note: Some women in video are not dressed with Frum standards]