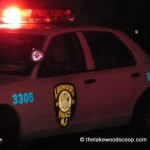 Police on Motzei Shabbos responded to multiple brawls outside the Elks club on West Kennedy Boulevard. The first fight involving dozens of people from an ongoing party was called in at about 10:15 PM. Multiple officers responded to the scene and broke up the fight.

Police have since responded at least two more times after fights again erupted in the area.

The Elks is located across the street from the Skverre Shul.