Police On The Lookout For Armed Robbery Suspects 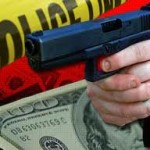 Lakewood and Jackson Police are on the lookout for two suspects accused of an armed robbery in Jackson today, Police say. At about 12:35 PM, the suspects, described as two black males, reportedly held up a woman with a semi-automatic handgun and then fled in a 4-door silver Acura.

It’s unknown if the suspects made away with any proceeds.

The car is reportedly registered in Lakewood. TLS-MK/TLS-CCP/TLS-JJ.