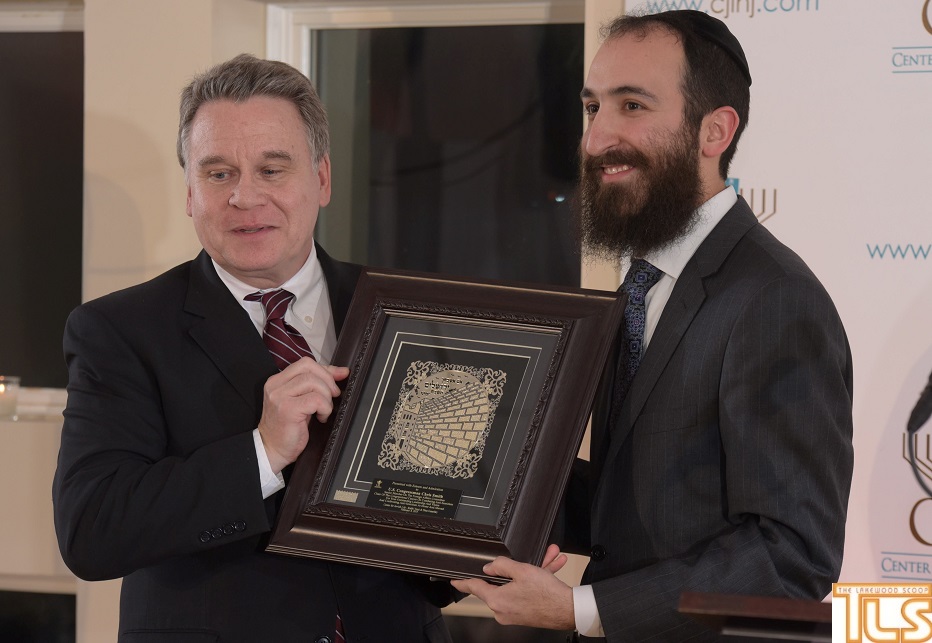 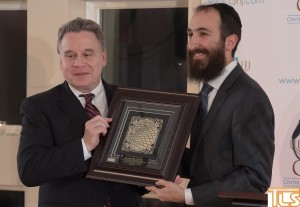 U.S. Rep. Chris Smith (NJ-04) was the honored guest speaker at the Center for Jewish Life Testimonial Dinner held Feb. 8 in Marlboro. Attended by over 300 people, the event celebrated the 11th anniversary of the Center and its mission of providing a spiritual home for Jewish families of diverse backgrounds and affiliations.

Congressman Smith was invited to give the keynote address in recognition of his work in Congress on human rights, especially his commitment to combating anti-Semitism.

“When political leaders fail to lead or denounce anti-Semitic violence, the void is not only demoralizing to the victims but silence actually enables the wrongdoing,” Smith said. “Silence by elected officials in particular conveys approval—or at least acquiescence—and can contribute to a climate of fear and a sense of vulnerability.”

“History has taught us that silence is not an option. It has been said that to sin by silence when they should speak makes cowards of men,” said Smith. “We must do more.”

Rabbi Yossi Kanelsky, Spiritual Leader of the Center for Jewish Life, thanked Congressman Smith for his decades of work in support of religious freedoms and presented Mr. Smith with an award featuring a gold-plated depiction of the Western Wall, the holy Jewish site of prayer and pilgrimage. 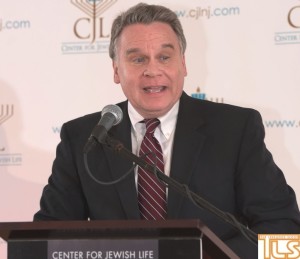 “This is presented with esteem and admiration for your outstanding leadership and vision and for confronting anti-Semitism at home and abroad,” said Rabbi Kanelsky.

The Center for Jewish Life provides a place for approximately 2,000 Russian-American Jews from Monmouth, Middlesex and Ocean Counties to learn to embrace their Judaism long denied them in Russia. The Center is a testament to the freedoms that America holds dear: the right to assemble, worship and live free of religious persecution.

Joshua Block, CEO and President of the Israel Project based in Washington, D.C., who also addressed the attendees, said Smith’s long history of fighting anti-Semitism had strong meaning for the Russian Jewish Community.

“Congressman Smith delivered a powerful and personal address calling for elected officials on both sides of the aisle, and civic and religious leaders of all faiths and backgrounds to fight the rising tide of anti-Semitism around the world, and here at home, especially on college campuses,” Block said. “His long history of involvement on this issue and fighting for religious freedom was especially poignant for the Russian Jewish community, so many of whom suffered and sacrificed under the tyranny of Soviet Russia just for being Jews. Now as Americans, they are so proud to be Jews, and lead the fight for others, inspired by the Congressman’s strong call to defend liberty and give a voice to those who yearn to be free.”

In his remarks, Smith congratulated all the honorees, as well as the event’s organizers. He also recounted his trips and experiences in the former Soviet Union, where many Soviet Jews, or “Refusniks,” sought safe haven for their families. Thousands settled in America, including New Jersey.

“On each trip and for hours on end, we heard stories of Soviet physical and mental abuse, systematic harassment, gulags and psychiatric prisons, and an array of seemingly wanton, brutal acts of anti-Semitism,” Smith said. “The Soviet system, militantly atheistic and morally incoherent, wouldn’t let Jews leave, but didn’t want Jews to stay either—a bizarre paradox.”

“He proposed what he called a simple test to help us distinguish legitimate criticism of Israel from anti-Semitism,” Smith said. “He called it the three Ds: Demonization, double standard, and de-legitimization.”

Smith recounted Sharansky saying that when Israel’s actions are demonized and blown out of all sensible proportion, such as when comparisons are made between Israelis and Nazis, it is likely anti-Semitism. Additionally, Sharansky told of how anti-Semitism is to blame when a double standard exists such as when criticism of Israel is applied selectively, or when Israel is singled out for human rights abuses while the behavior of major human rights abusers—such as China, Iran, Cuba, and Syria—are largely ignored. Finally, if Israel is de-legitimized when its fundamental right to exist is denied, anti-Semitism is the likely culprit.

Rep. Smith has long been a congressional leader in the fight against anti-Semitism. He is the author of the provisions of the Global Anti-Semitism Review Act of 2004 that created the Office to Monitor and Combat Anti-Semitism within the U.S. State Department.

In 2009, he delivered the keynote address at the Interparliamentary Coalition Combating Anti-Semitism London conference. As a result of his landmark 2002 hearing, “Escalating Anti-Semitic Violence in Europe,” he led a congressional drive to place the issue of combating anti-Semitism at the top of the Organization for Security and Cooperation in Europe (OSCE) agenda. As a result, in 2004 the OSCE adopted new norms for its 56 member states on fighting anti-Semitism. In the early 1980s, his first trips abroad as a member of Congress were to the former Soviet Union, where he fought for the release of Jewish “refuseniks,” and in the 1990s, he chaired Congress’s first hearings on anti-Semitism.

Smith is co-chairman of U.S. Helsinki Commission and an Executive Member of the Tom Lantos Human Rights Commission.