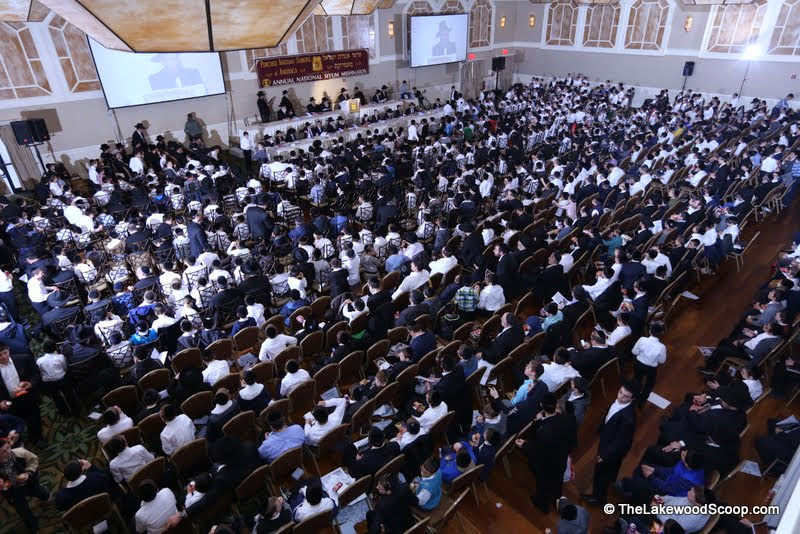 Youthful enthusiasm permeated the air from the moment a long line of coach buses from out-of-town communities, filled with children, streamed down McDonald Avenue. An additional large number, some with their proud fathers alongside them, came from throughout the Boro Park/Flatbush area by foot and by car.

This is Pirchei Agudas Yisroel’s flagship event celebrating all the Mishnayos learned, all the spiritual inspiration – and all the fun, trips and raffles – that help the next generation carry forth the torch of Torah with enthusiasm and pride.

Founded by legendary mechanchim Rabbi Yehoshua Silbermintz z”l and Rabbi Eli Teitelbaum z”l, Pirchei Agudas Yisroel has been a bedrock for Orthodox youth in America for over a half century of turbulent times for our community. Rabbi Fischel Schachter, who served as emcee at the Siyum, drove home this point in his unique entertaining manner. Rabbi Schachter described the era in the 20th century when many Jews had to choose between keeping Shabbos and keeping their jobs. Pirchei Agudas Yisroel served as their children’s anchor for the future. The children went to Pirchei where there was Torah, oneg Shabbos, warmth and camaraderie. Many people from that generation say, ‘Pirchei saved my life.'”

The Siyum brought together boys in grades 4-8 from throughout the northeast: Brooklyn, Cherry Hill, Lakewood, Monsey, Passaic, Philadelphia, Queens, South Fallsburg, Staten Island and more. The constant cheers and applause attested to their excitement to be part of this global youth Torah movement.

In addition to the sandwiches, nosh and soda that was given to every boy at the entrance, there was a raffle for exciting prizes every few minutes.

Close to 40 boys finished Shisha Sidrei Mishna as part of the Kesser Mishnayos Program. In honor of this extraordinary accomplishment, they were invited to sit on the dais during the Siyum. Before the doors opened to the Siyum, these

The other boys in the audience learned and were tested on various amounts of Mishnayos during the past year, and participated in the exciting weekly programs and special trips of their local Pirchei chapter.

Rabbi Ephraim Levi, national director of Pirchei Agudas Yisroel, elaborated upon just how broad the Pirchei movement is. There are over 125 chapters across North America – 10 added within the past year alone – in addition to similar groups around the world. “I personally attended five Pirchei Siyumim around the world, including Antwerp, Belgium; Chicago, Denver, Montreal, Canada; and Scranton” said Rabbi Levi.

A special video presentation was shown highlighting the life and accomplishments of Rabbi Chaim Mordechai Katz zt”l, Telzer Rosh Yeshiva, in honor of his 50th yartzeit. The presentation highlighted the rich history of Telz in Europe and how “Reb Mottel” rebuilt the Torah dynasty in America, despite many difficulties in his personal life and in his avodas hakodesh. By founding leading Yeshivos in both Cleveland and Chicago, Reb Mottel rightly earned his place as one of the premier builders of Torah in the Midwest.

Rabbi Yosef Frankel, Vyelipoler Rebbe and member of the Moetzes Gedolei HaTorah, delivered divrei beracha, opening his address with a warm greeting: “It is a privilege to address such a maamad Kiddush Hashem by the children of hakadosh baruch hu.

“The Rebbe expounded upon the words of the Gemara in Maseches Bava Basra that yidden are considered to be Hashem’s children, as opposed to servants, when they do His will. The “will” of Hashem is not merely what He commands us to do, but rather when we do what He would want even when not obligated. “When you learn Torah during your own time, you’re doing what Hashem wants,” the Rebbe told the Pirchei boys.

The Hadran on Shisha Sidrei Mishna, and the has’chala of the new cycle, was recited by the boys who were mesayeim all of it. Each one of these boys had a chance at the podium to say his portion. The sight was exceptionally heartwarming. The saying of Kaddish was sponsored by Mr. and Mrs. Abe Eisner in honor of their parents a”h.

Following the Siyum, Rabbi Chaim Dovid Zwiebel, executive vice president of Agudath Israel of America, spoke about how Pirchei Agudas Yisroel is a crucial component of the broader Agudas Yisroel movement. He referenced the famous newly unearthed video of the Chofetz Chaim zt”l at the first Knessiah Gedolah of Agudas Yisroel. “That is a reminder that Agudas Yisroel is a movement that was founded by the greatest gedolei Yisroel of the world,” Rabbi Zwiebel exclaimed. “Here you are carrying forth their legacy through limud haTorah!”

The beautiful Siyum culminated with birchas hamazon, singing “Siman Tov” in unison, a grand raffle, and a special video presentation on Shmittah by Rabbi Maimon Elbaz. Rabbi Elbaz delved into various aspects of Shmittah, all vividly displayed in color. He discussed some of the history of shemiras Shmittah in Eretz Yisroel; what is perrmitted and forbidden; what type of purchases we must beware of in America due to Shmittah concerns; the miracles that shomrei Shviis have experienced over the years; as well as some of the mussar lessons that the gedolim have learned from this special mitzvah.

Rabbi Elbaz expressed his amazement at their familiarity with hilchos Shviis, attributing this in part to what they learned in Mishnayos Maseches Shviis within the Pirchei program.