PHOTOS: Dignitaries and Leaders Gather to Pay Tribute to LCSW 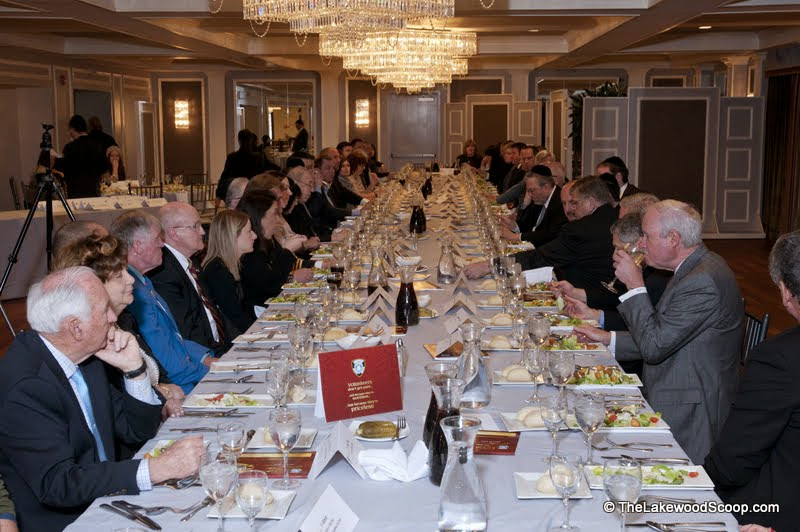 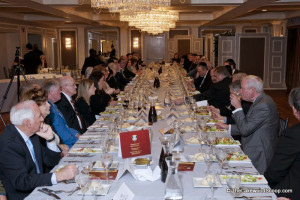 By R.S. A distinguished lineup of law enforcement members, government official on every level of politics and influential businesspeople gathered on Wednesday afternoon with a united goal: to salute LCSW, an organization which plays a vital role in keeping Lakewood safe.

The event was LCSW’s tribute luncheon, an annual affair where the organization quietly pays tribute to some of its most vital supporters and of course, to the backbone of the organization, its volunteers.

Close to 100 dignitaries and officials were in attendance, representing a vast number of agencies and businesses. Police chiefs from neighboring towns, representatives from the upper echelons of every hospital in Ocean County, numerous attorneys, bank officials and emergency agencies, as well as government officials from the federal level all the way to the local level were only some of the stanch supporters of LCSW present.

The event paid tribute to the honorees: Senator Bob Singer, Deputy Mayor Menashe Miller, Freeholder Director John Bartlett and Assemblyman David Rible, all elected officials who have done much for the people of Lakewood in general, and specifically, who have been powerful supporters and advocates for the organization.

A member of the Board of Directors of LCSW opened the event by thanking all of the attendees and giving credit to the backbone of LCSW, the volunteers and their families. He introduced the event slogan, proudly inscribed on the Tribute Journal, “Volunteers aren’t paid… not because they are worthless, but because they are priceless.”

“We are an organization comprised of volunteers with little time but giant hearts,” he said. “I would like to thank them and their families on behalf of the Board of Directors for giving up on precious family time so that they can help others.”

Police Chief Rob Lawson lauded the organization as a “tremendous asset to the Lakewood community.”

He outlined a number of incidents, some publicly known and some not, where LCSW assisted in removing dangerous criminals from the streets of Lakewood and  thanked the volunteers for volunteering so much of their valuable family time for the cause.

“I thank them from the bottom my heart for all that they do for Lakewood,” the chief concluded.

He was then joined by close to a dozen high ranking law enforcement officials from various departments in different municipalities.

The honorees each spoke in honor of LCSW, highlighting the importance of volunteerism and bringing Lakewood in general and LCSW in particular as a prime example of the way volunteerism should look.

“The good that LCSW does for Lakewood is noticed by all of us,” said Deputy Mayor Menashe Miller, whose mother, wife and daughters were in the audience to watch him accept his honor.

Mayor Albert Akerman spoke in glowing terms about LCSW and  their impact on the town. Mayor Akerman personally has gone out on nightly patrols with LCSW members.

Freeholder Joseph Vicari praised Lakewood, “the fastest growing municipality, not only in New Jersey, but in the entire country”, for its emphasis on education and for taking care of its youth even when they run into trouble.

As an educator for over four decades, Freeholder Vicari recognized the leadership in Lakewood and the vibrant influence of organizations as guiding forces in the lives of Lakewood youth.

Honoree Assemblyman Dave Rible, one of LCSW’s greatest advocates in the state assembly, spoke about how his background in law enforcement  – Rible is a former police officer – helps him appreciate how truly vital LCSW is.

“With everything that is going on around the country, we see how important it is for the very fabric of a municipality to have the support of a civilian watch they can trust,” said Rible.

Honoree Senator Singer, joined by representatives from the medical community and other distinguished guests, commended each of the honorees and the township for all they do for Lakewood and for their unwavering support of LCSW.

He then stressed the recurring  theme of the afternoon, the importance of volunteerism.

“Volunteerism is not dead; just take a look at Lakewood,” said Senator Singer. “What these gentlemen do for Lakewood, the dedication they show 24/7, is unparalleled.”

The final honoree to speak, Freeholder Director John Bartlett Jr.,  bore the distinction of not only being born in Lakewood, but coming from a mother and grandmother born in Lakewood as well. His deep Lakewood roots were evidenced in the pride in his voice as he discussed his home town and its admiral focus on children and family, surrounded at the podium by many attendees representing various departments in the county government.

“It’s the volunteers that make our society work,” said Director Bartlett. “It’s all of us working together to make our communities safer places to live.”

Before dessert was served, attendees took turns rising to introduce themselves and their titles, and offer a quick message of support to LCSW.  The caliber of attendees was astonishing and indicative of the support LCSW receives from the highest levels of government, law enforcement and business.

A private appreciation event was then held to honor those who truly deserve the honor, the tireless and unbelievably dedicated volunteers of LCSW. The intimate members-only gathering paid tribute to the vital work that these volunteer dedicate hours of their time to do for the Lakewood community.

Ultimately, no amount of accolades or tribute luncheons can truly begin to repay the volunteers for giving up so much to keep Lakewood safe. They don’t ask for accolades, though. All they desire is the opportunity to help their people and their community, to be there as a source of comfort and protection to whom every single Lakewood resident knows he or she can turn in a time of doubt, concern of fear.

Wednesday was all about recognizing the lifesaving contributions of the priceless volunteers that make up the Lakewood Civilian Safety Watch.