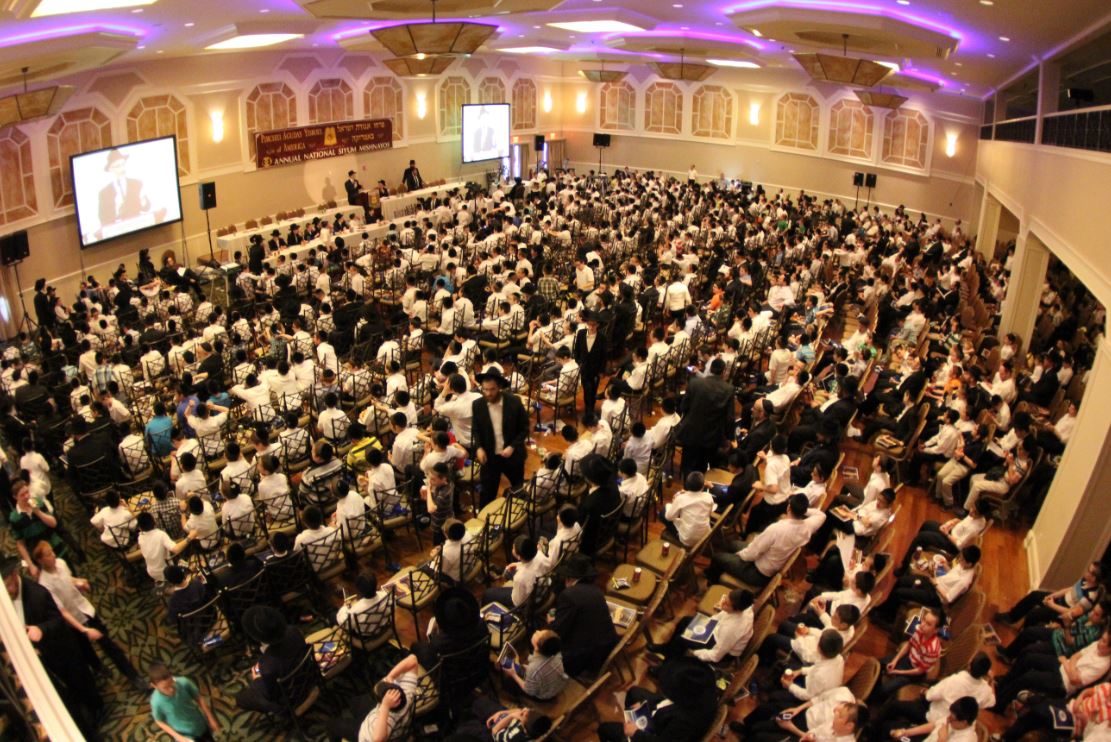 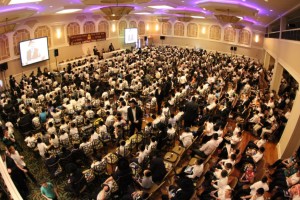 By: Shimmy Blum. The 1,200 seats in the majestic The Palace hall in Brooklyn were filled to capacity. A broad dais filled with leading Roshei Yeshiva and rabbanim, shlit”a, graced the front wall. A constant stream of cars and coach buses from neighborhoods throughout Brooklyn, Monsey, Queens, Passaic and more filled McDonald Avenue.

The 51st annual Pirchei Agudath Israel Siyum Mishnayos on Sunday afternoon had all the markings of a prominent historic milestone in the Torah world – with a distinct youthful twist. With raffle tickets, salami sandwiches, and soda cans in hand – and lively music playing in the background – the exuberance and fulfillment were visible on the faces of the boys. Ranging in age from eight through fourteen years old, most of the boys donned white shirts in honor of the occasion. A handful of Pirchei leaders, mechanchim, and fathers mingled about in bigdei Shabbos as well.

“Boys, let me tell you a secret,” exclaimed Rabbi Ephraim Levi, national director of Pirchei Agudath Israel, “You are a part of history.”

Every attendee at the Siyum had the honorable distinction of voluntarily learning Mishnayos.

The quantities varied greatly. Some boys began with a handful of Mishnayos. Others

completed full Masechtos and Sedarim. The boys who completed all of Shisha Sidrei Mishna – mostly in honor of their Bar Mitzvah – had a special pre-Siyum farher on what they learned, and graced the head table at the floor of the dais.

But the celebration was shared equally by all.

It was a most heartwarming scene to see genuine simchas haTorah on the faces of so many pure tinnokos shel bais rabban, eager to build upon their accomplishments. It was just over half-century ago when the concept of learning and being tested on Mishnayos was incorporated by Rabbi Yehoshua Silbermintz, z”l, and Rabbi Eli Teitelbaum, z”l, into Pirchei Agudath Israel, which has served the invaluable role of inspiring generations of American youth.

Despite the significant changes and challenges that the subsequent decades have brought, Pirchei Agudath Israel of America has blossomed into 125 branches across North America, in virtually every frum neighborhood on the continent. The program now consists of diverse programs related to learning Mishanyos, with leaders and testing stations throughout frum neighborhoods. Pirchei divisions in other regions celebrate their own annual Siyum. Individual Pirchei branches host Melave Malkas, trips, Chol Hamoed learning programs and other exciting initiatives throughout the year. 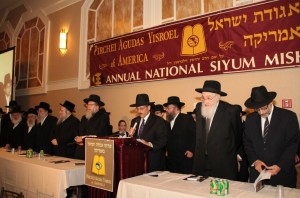 This year’s Siyum was dedicated in memory of Rabbi Silbermintz and a live tribute to everyone who played a role in the program’s rich history. At the same time, at the milestone of the program’s second half-century, it was announced that additional Pirchei branches will iy”H be opened in the near future, and a special “Mishna Yomi” program, where boys across the continent will learn a common Mishna a day, will commence on Rosh Chodesh Elul.

Noted mechanech and motivational speaker Rabbi Fischel Schachter, shlit”a, Maggid Shiur in Yeshiva Torah Vodaath, served as the Siyum’s master of ceremonies. In his inimitable humorous manner, Rabbi Schachter relayed to the boys the magnitude of the kiddush Hashem they made and the importance of their role in the mesorah of klal Yisroel, followed by a series of inspirational stories and anecdotes throughout the event.

Prior to the recital of Tehillim, Rabbi Schachter expounded upon how Dovid Hamelech received his years of life from Adam Harishon and had a view of all the generations of yidden through Moshiach. “When Dovid Hamelech wrote Tehillim, he saw you,” said Rabbi Schachter. Led by Rabbi Yehoshua Grunfeld, shlit”a, Rosh Kollel Iyun Hatalmud in Monsey, the boys recited Shir Hamaalos Mimakim in a loud and poignant manner.

Learning Mishnayos is a crucial cornerstone in amassing yedios haTorah and mastering Gemara and other advanced limudim. However, Rav Eliezer Ginsberg, shlit”a, stressed the importance of Mishnayos in and of itself. He relayed a story where Rav Moshe Feinstein, zt”l, remarked to Rav Asher Katzman zt”l, Rosh Yeshiva of Yeshiva Torah Vodaath, that he had learned a particular Mishna in Maseches Parah 400 times. The gadol hador would constantly be seen reviewing Mishnayos.

“Above our heads are the millions of malachim you’ve created through the osios of the Mishnayos that you’ve learned,” Rav Ginsburg said. To audible giggles from the audience, Rav Ginburg invited any boy who reviewed a single Mishna 400 times to notify him – he publicized his personal phone number – and be treated to a prize.

The joy was palpable in the air as the boys who completed all of Shisha Sidrei Mishna lined up atop the dais and – one by one – recited a portion of the Siyum, Hadran, and has’chala of Maseches Berachos at the podium. Mr. Abe Eisner, a generous donor towards the Siyum, recited Kaddish.

The crowd then burst into lively spontaneous dancing, and boys from throughout the audience lined up to individually shake the hands of the gedolim on the dais.

After announcing the winners of yet another few raffles, Rabbi Levi elaborated upon Pirchei’s rich history and the exciting new Mishna Yomi program. Video footage from the most recent Agudath Israel dinner was shown on the screen, where the Rosh Yeshiva of Philadelphia and member of the Moetzes Gedolei HaTorah of Agudath Israel, Rav Shmuel Kamenetsky, shlit”a, effusively praised the Mishna Yomi concept, and the significance of boys acquiring all or most of Shisha Sidrei Mishna by the time they reach Bar Mitzvah. 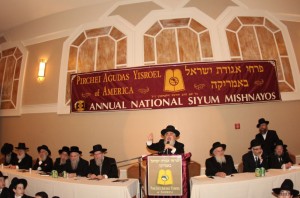 A video presentation featuring photos and clips of various leading gedolim, visionariesand major Torah events in recent decades and centuries was shown, inculcating the far reaching effects of each innovation in the realm of Torah learning. It was stressed that “Mishna Yomi” is within reach of boys at all learning levels, as well as to their siblings, parents, grandparents, and everyone else. “What a wonderful me’acheid this is,” marveled Rabbi Yaakov Bender, shlit”a, Menahel of Yeshiva Darchei Torah in Far Rockaway.

As the sun began setting and the Siyum was drawing to a close, Rabbi Chaim Dovid Zwiebel, executive vice president of Agudath Israel of America, articulated how important the youth division is to the powerful national organization. He related how he constantly quips, “I get to meet important people all year, but at least once a year, I get to meet some really important people.”

After people guess that he is referring to the movers and shakers at events such as the annual White House Chanuka party, or Agudath Israel’s annual missions to Washington, DC, and Albany, Rabbi Zwiebel explains that Pirchei events are the most paramount. “Who are those really important people?,” he exclaimed. “You! The tinnokos shel bais rabban on whose ‘hevel pihem’ all of klal Yisroel stands.”

Amid the wide smiles energetic dances of the boys, welled up eyes could be seen on the faces of adult attendees as the boys placed their hands on the shoulders of their friends and swayed to the rhythm of Boruch Levine’s classic “V’zakeini Legadeil” sung by Nachi Baldinger. The scene was a live testimony to those words, and to the eternity of Torah and radiant, ehrliche Jewish generations – despite the spiritual morass surrounding us at every step.

Following Birchas Hamazon – which was led in song by a young boy at the podium – Rabbi Schachter told an inspirational story about the Lakewood Mashgiach, Rav Nosson Wachtfogel zt”l. Raffles for three major prizes were held – with the loudest audience cheer going to the winner of a set of Shas.

Wrapping up the event was a special video summation of the life of Chacham Ovadiah Yosef zt”l, produced by Pirchei Agudath Israel of Montreal, featuring intriguing historical photographs and video clips. The narrator recited a slew of inspirational stories attesting to Chacham Ovadiah’s otherworldly mesiras nefesh for Torah, dedication to the klal and, most of all, his love for and belief in the potential of every individual yid, regardless of his current spiritual state.

After the hall had emptied and the buses left, Rabbi Levi reflected upon what we had all experienced: “This is the annual major Torah event for children. It gives me chizuk to see so many children gather in honor of Torah, and the Mishna Yomi program will iy”H spur even more Torah learning.”