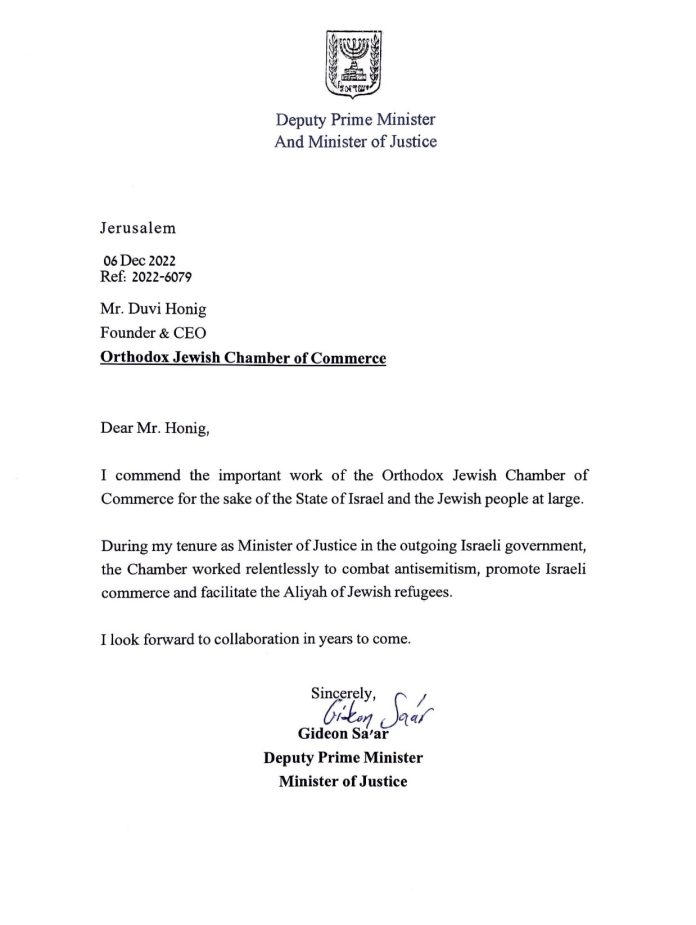 Gideon Sa’ar, the Deputy Prime Minister and Minister of Justice, Jerusalem, commended Duvi Honig, the founder and CEO, of the Orthodox Jewish Chamber, Wall Street, New York, for its important work for the State of Israel and the Jewish people.

Sa’ar said, “During my tenure as Minister of Justice in the outgoing Israeli government, the Chamber has worked relentlessly to combat antisemitism, promote Israeli commerce, and facilitate the Aliya (migration) of Jewish refugees.  I look forward to collaboration in years to come.”

Honig said, “The Orthodox Jewish Chamber of Commerce is honored and humbled to be recognized by the State of Israel for our work and advocacy on behalf of the Jewish nation. We have used the strength of commerce to influence and advocate when diplomacy failed, cutting red tape and making a difference on the highest levels.”

The Orthodox Jewish Chamber of Commerce prides itself in the United States and Israel by using its influence and relationships politically and in commerce on behalf of the Jewish nation. Some examples include successfully fighting Unilever and having Facebook remove a violent game Murder Israeli Soldiers; fighting hate against Israel in business and social media; and working with governors, the White House Congress and the Senate on behalf of Israel’s economic interests.

The Chamber also used its relationships to facilitate the new peace between Israel and Turkey; helped save Israeli elderly and sick Jews from Ukraine by establishing an emergency evacuation fleet; and by going into bombed cities to save lives and helping to bring them to Israel and place children into religious schools.

Honig said, “We have personal relationships with the new administration and look forward to working with them in all ways to advocate and use the strength of commerce to fight anti-Israel dealings in the business world and around the globe by building bridges using commerce.”