PHOTO: O.C. Prosecutor Hails Narcan Success as it Saves Third Life in Less Than a Month 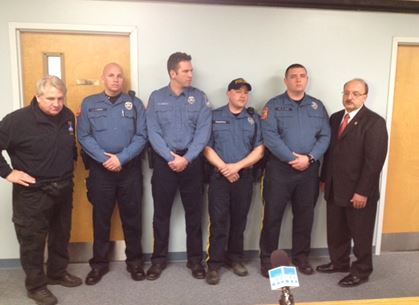 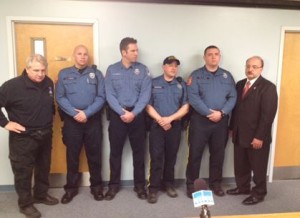 The most recent save came at approximately 8:30 pm on April 22, when Seaside Heights Patrolman Edward Pasieka responded to a 911 call reference a heroin drug overdose at a Sampson Avenue address in Seaside Heights. Upon his arrival he found a 22 year old female on the living room floor unresponsive, with shallow breathing and a weak pulse. Officer Pasieka administered the Narcan spray and the victim immediately regained a strong pulse and began to breathe normally. A local First Aid Squad transported the victim to Community Medical Center in Toms River where she is recovering.

The second save came just before 3 am on April 22, when Seaside Heights Patrolman Erik Hershey responded to the Desert Palm Inn on North Ocean Avenue in Seaside Park. Officer Hershey administered the Narcan Nasal Spray and the female victim (in her mid-twenties) immediately became responsive. Tri-Boro First Aid Squad transported the victim to Community Medical Center in Toms River.

The first save came on April 6, when a male overdose victim (in his twenties) was revived when Seaside Heights Patrolman Daniel Davis, with assistance from Ptl. Lawrence Mayberry, administered the Narcan spray.

The Ocean County Prosecutor’s Office developed the program’s policy and training protocols in early January of this year, and will assist other counties across New Jersey in starting their own Narcan programs. The first Narcan Kits were distributed throughout the county over the past month.

Attached is a photo taken this morning at the Seaside Heights Police Department of Prosecutor Coronato thanking the officers involved in the three saves for their quick and decisive lifesaving actions.