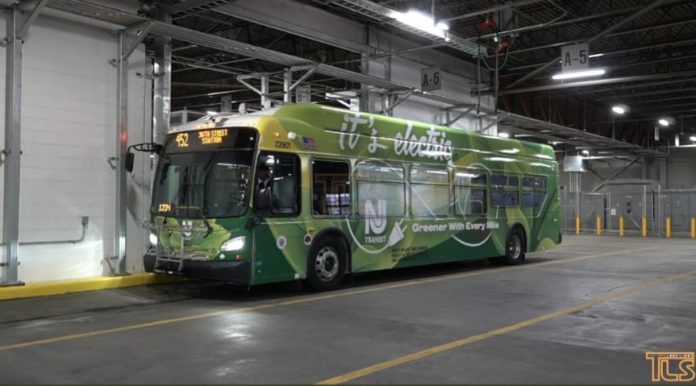 NJ TRANSIT has unveiled its first battery electric bus during a ceremony at the Newton Avenue Bus Garage in Camden, New Jersey, from where the first bus will operate.

The bus is the first of eight new electric buses that will undergo a year’s worth of street testing in Camden.

The eight buses were purchased for $10 million, which came from fines and lawsuits relating to pollution, including some money from a nationwide settlement with Volkswagen that followed charges that it bypassed emissions equipment on cars.

The acquisitions were the final step in a years-long process.

In September 2020, NJ TRANSIT’s Board of Directors awarded a $3.235 million contract to Scalfo Electric of Vineland to renovate the Newton Avenue Bus Garage with electric vehicle charging stations and other associated infrastructure modifications. The eight new charging stations were unveiled in March 2022.

In October 2021, NJ TRANSIT’s Board of Directors approved a $9.4 million contract with New Flyer of America for the purchase of eight 40-foot battery electric buses. The contract calls for eight buses with options allowing the purchase of up to 75 additional zero-emission buses.

A fully charged bus has a range of approximately 175 miles, but that can vary based on several factors including the weather, passenger volume and road conditions.

It is the third largest transit system in the country with 166 rail stations, 62 light rail stations and more than 19,000 bus stops linking major points in New Jersey, New York and Philadelphia.