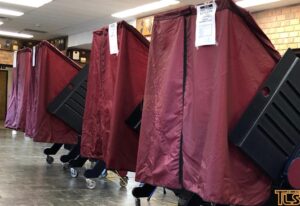 Registered voters would be able to cast their ballots in person at designated polling places before future general and primary elections under legislation approved Monday by the full Assembly, 58-11-1.

Under the bill (A-4830) sponsored by Assembly Democrats Andrew Zwicker (D- Middlesex, Somerset, Mercer, Hunterdon) Joseph Danielsen (D-Middlesex, Somerset) and Verlina Reynolds-Jackson (D-), designated polling sites would be available for in-person voting ten days before a general election up until the Sunday before the election. Polls would be open Monday through Saturday from 10 a.m. to 8 p.m., and Sunday from 10 a.m. to 6 p.m.

Each county board of elections would designate five to ten early polling locations, depending on the number of registered voters in the county. The voting process during the early voting period would be conducted using optical-scan voting machines that read hand-marked paper ballots or other voting machines that produce a voter-verifiable paper ballot. Additionally, county boards would create and execute written plans for security of voting machines, ballots and records during the early voting period.

The sponsors released the following joint statement on the bill:

“Voting must be easy, convenient and accessible; our democracy depends on participation of the people. However, the current system makes it difficult for the people to exercise their constitutional right to vote. Heading to the polls on Election Day may require voters to take off work on a weekday, find care for their children or demand hours of their time. It shouldn’t be this hard to cast a ballot.

“New Jersey must join the ranks of two dozen other states that allow in-person early voting, giving voters more opportunities to cast their ballots at their convenience. More people voting strengthens our democracy.”

The measure now goes to the Senate for further review.