New Jersey gun holders have recently begun receiving a notice from the state notifying them that the recently imposed list of “sensitive places” where guns are banned, will now be permitted to carry, being that only the New Jersey Legislature can impose such a ban by law.

“This court being of the opinion that the designation of said “sensitive places” is more appropriately deemed a legislative function which should be addressed by statue to promote uniformity and consistency,” the letter from the Ocean County Superior Court, and reviewed by TLS, said.

The letter went on to say that “the list of “sensitive places” where the permit is deemed invalid,” as previously stated, is “vacated and rescinded.”

The order comes as the New Jersey Legislature continues to move on its latest gun control bill which would prohibit licensed gun holders from carrying in nearly two dozen public areas.

However, as previously reported on TLS, the bill, which had been rushed, has stalled amid concerns from Republican lawmakers about the bill’s vague language.

Many legal observers expect the bill to be challenged in court once ultimately signed by Governor Murphy. 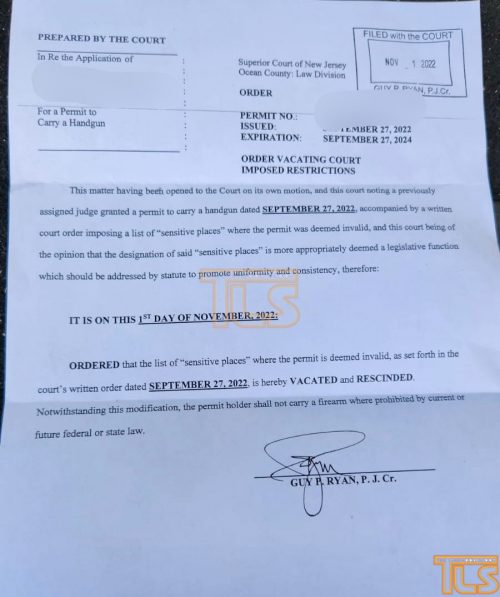