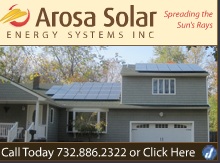 After a surge in applications this month, a New Jersey program to give homeowners rebates for installing solar panels on their homes has stopped accepting new requests until September. The state Board of Public Utilities’ decision came today — eight days after more than 1,100 people submitted their applications to the program on the same day, some after camping out to do so. For most of the past decade, New Jersey has offered some of the most generous incentives to persuade homes and businesses to use the sun’s power to generate electricity.

By 2007, the state trailed only California in the number of homes using the technology.

Still, the total number of homes involved has remained modest.

Last year — the biggest year for the program so far — 1,030 homes were equipped with solar equipment.

Anticipating a rush would come eventually, the state divides its rebate fund into three pools so that not all the funding would be gone at the start of the year.

Last month, for the first time, the money for one period was exhausted before a funding cycle ended. No applications were accepted between April 2 and May 3.

When the new cycle began on May 3, there were fears that the money allocated between now and the end of August would go even faster as solar-installing firms ramped up their sales efforts.

On the first day applications could be submitted, more than 1,100 arrived. Since then, another 125 have rolled in.

The rebates are lucrative — just over $10,000 for a typical 7,500 watt system. That could cover around one-fourth of the cost of a system.

BPU spokesman Greg Reinert said the BPU decided not to take any more applications until the next funding cycle begins Sept. 1.

But all the eligible projects that were submitted will still get the rebates, he said, even if the amount surpasses the $6 million set aside for them. Money could be transferred from another fund, he said.

Dave Llorens, CEO for One Block off the Grid, a San Francisco firm organizing groups of solar system buyers, said his company will keep working in New Jersey and encouraging customers not to wait until September to install their systems because the state still offers strong incentives for moving to solar. “It just went from great to good,” he said.

He said a second program offered in New Jersey can be an even bigger incentive. It awards certificates to people or businesses who generate solar power. The certificates can then be sold to utility companies who use them to avoid fines for producing non-solar power. AP