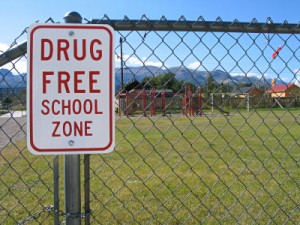 A bill that is advancing in the state Senate would strike down the mandatory prison sentences for anyone caught selling drugs near a school, which opponents of the current law say is ineffective, according to a report in Gannett. The legislation, which passed the Senate judiciary committee last week, would eliminate the three-year mandatory prison term applied to most people caught selling drugs within 1,000 feet of a school, the paper reported. Star Ledger.