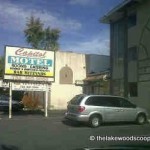 A man with psychiatric history who went missing in New York today, was found in Lakewood. Volunteers in New York were searching for the man who was last seen in Boro Park, but Chaveirim in Lakewood learned that the man had made his way to Lakewood.

A Chaveirim volunteer spotted the NY-Lakewood bus as it arrived in Lakewood and followed it until it stopped at the Capitol Hotel. As the man got off the bus, he was immediately identified by other Chaveirim members.

Police were also called and brought the man to headquarters, where he will be picked up by HASC. TLS.