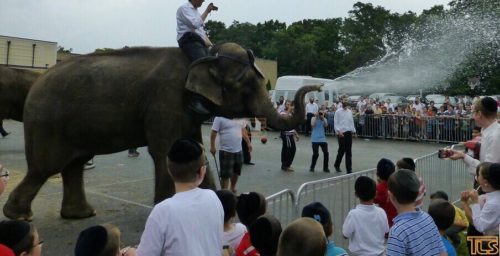 “Animals are living, breathing, and feeling beings that deserve to grow and thrive in their natural habitat or protected sanctuaries—not to be exploited to perform tricks in someone’s sideshow under cruel conditions,” said Sen. Menendez. “The entire nation should follow New Jersey’s lead by doing what’s humane, just and right for these wild creatures.”

“New Jersey has illustrated that the exploitative use of exotic animals in traveling performances is antiquated and no longer has a place in our society,” said Sen. Booker. “By following in New Jersey’s footsteps, this bill would remove wild animals such as lions, tigers, and elephants from harsh conditions and provide protections for workers and the public.”

Wild animals used in public performances are typically subjected to small cages, physical abuse, and poor nutrition and hygiene, which can often lead to disease, infection, mental distress and depression in the animals. With multiple incidents of chimpanzees, elephants and zebras attacking and injuring circus guests, the unpredictability of wild animals poses a threat to public safety.

“Last year, Senator Menendez’s state of New Jersey became the first in the nation to outlaw the use of exotic animals in traveling performances. I thank him for extending that compassionate spirit to federal legislation by introducing the Traveling Exotic Animal and Public Safety Protection Act,” said Cathy Liss, President of Animal Welfare Institute. “The circus ring is no place for a wild animal, and the confinement and training methods behind the scenes are simply barbaric. These acts are exploitation, not entertainment, and this bill would put an end to the abuse.”

The Traveling Exotic Animal and Public Safety Protection Act would not apply to the use of animals in zoos or aquariums; research facilities; and certain films, television programs, or advertising. Congressman Raul Grijalva (D-Ariz.-03) introduced companion legislation in the House.