Man Charged with Carjacking, Other Offenses after Wild Chain of Events in Lakewood 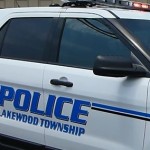 A man is in custody with multiple charges after a wild chain of events in Lakewood today, Detective Sergeant Greg Staffordsmith says. At about 4:30 PM this afternoon, Officer Matthew Rivera was dispatched to the area of Princeton Avenue and Governors Rd for a reported carjacking.

Upon arrival, he learned that a male, operating a 2001 BMW had just struck a 2006 Chevy Impala before carjacking the occupants of a 1997 Toyota Camry.

According to witnesses on scene the operator of the BMW, identified as 25 yr old Anthony Hamilton of Lakewood, proceeded into traffic on Governors Road from Tudor Ct at a high rate of speed. Upon doing so he struck the 2006 Chevy Impala on the drivers door while attempting to stop the occupants of the Toyota Camry.

As he closed the distance, still at a high rate of speed, he intentionally stuck the rear of the car, causing it spin out. Inside the vehicle were three females who were known to Hamilton.

Hamilton, exited the BMW and approached them on foot. As he got to the door the females exited the vehicle. He then entered the vehicle and fled the area leaving the BMW behind. Lakewood EMS responded however all medical treatment was declined.

Information, quickly developed at the scene, suggested that Hamilton may be headed to his East 5th Street home.

Officers Sean Ward and Michael Ruiz responded to that location and observed Hamilton pulling into the driveway of his home. He was taken into custody without incident.

Further investigation by Officer Mark Zrebiec revealed that Hamilton was released hours before from the Lakewood Police Department after posting bail on charges related to an earlier domestic violence assault. According to the complaint he struck his partner, a 22 year old Lakewood woman.

After his release he proceeded to take her home in Brick NJ and took the 2001 BMW registered in her name. He then proceeded to an area of Lakewood where she is known to frequent and waited for her at the intersection of Tudor Ct and Princeton Avenue.

Upon seeing the Toyota Camry that she is known to operate come across his path he initiated his attack.

Anthony Hamilton was charged with Carjacking, Assault by Auto, Burglary to Auto, Theft of Auto and numerous motor vehicle summons. Bail was set at $400,000 without a 10% option by Superior Court Judge Wendell Daniels.