LPD: Carjacking Victim Watched as Suspect Drove Off With His Children in the Car; Suspect Sought 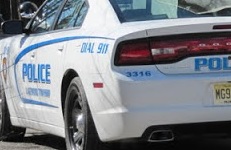 On April 4 at approximately 9:55 p.m., Officer Buble responded to 700 Clifton Avenue after being dispatched to the report of a stolen car occupied by two young children.

Upon arrival she met with the victim, a Pinehurst Drive resident, who was visibly upset. He explained that he had just arrived at the apartment complex to get a phone number from his friend who was meeting him at the door.

The victim reported seeing an unidentified Hispanic male who appeared to be talking on a cell phone while standing up against another nearby vehicle.

As he was speaking to his friend at the door and only a short distance from his vehicle, he observed the unknown suspect enter his car and speed off. The victim attempted to give chase on foot.

After his failed attempt, he immediately called 9-1-1 to report the event and advised that he last saw the vehicle heading South on Madison Avenue (Rt. 9).

Within minutes of PO Buble’s arrival on scene, PO Michael Anderson located the abandoned vehicle parked several blocks away on Third Street, just west of Madison Avenue. PO Anderson advised that both children were safely sleeping in the back seat.

Witnesses advised him that they observed a Hispanic male fleeing from the vehicle on foot. At that time, assistance from the Ocean County Sheriff’s Dept K-9 Unit was sought to try and track the suspect and the Criminal Investigations Unit to processes the car for any evidence which may help identify the suspect.

The children were immediately reunited with the father.

The suspect is described as Hispanic male, approx. 18-24 yrs old. He is described as having dark features, a goatee and was last seen wearing a red baseball hat, a red zip up hooded jacket and wearing brown or maroon pants.