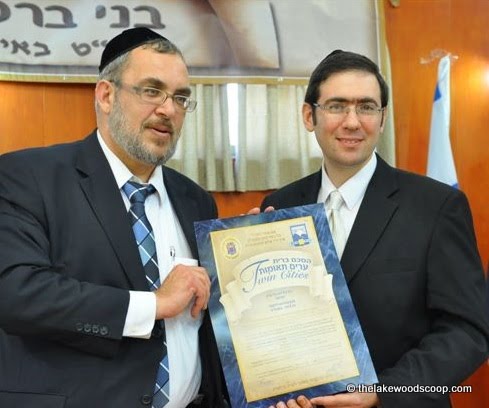 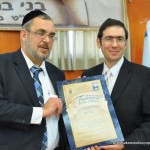 [From upcoming issue of Mishpacha Magazine] Bnei Brak has always been known for its lofty achievements in the Torah world. While religiously guarding that reputation, municipal officials are now setting their sights on making sure the city also has an enduring economic future. And at half the price of neighboring Tel Aviv, yeshivah-studded Bnei Brak has become a new business frontier.

Zev Ben-Avraham has been wearing a wide grin ever since the 4 a.m. phone call that roused him with the glad tidings that his fourth grandchild, a healthy baby boy, had just been born.

“Look, I already have his picture here on my iPhone,” says Mr. Ben-Avraham, as he proudly shows off the new arrival to anyone who can see the picture through the gleam of the bright morning sunshine reflecting off the phone’s screen.

Mr. Ben-Avraham may be typical of the new breed of Israeli who finds Bnei Brak to be a hospitable business address. Eight years ago, he left a position as manager of a country club in Savyon, one of Tel Aviv’s ritziest suburbs, to become site manager at Bnei Brak’s Africa-Israel (AFI) Concorde office tower, owned and constructed by real estate developer and diamond tycoon Lev Leviev.

From the tower’s rooftop panorama, one can see the loftiest sections of the city — as well as the humblest. The expanse of the Ponovezh Yeshivah is visible at a distance in the east, while on the street level just below are blocks of shuttered car repair garages, and even some wedding halls slated for demolition to make room for new business towers.

Bnei Brak has always been known for its lofty achievements in the Torah world. While religiously guarding that reputation, city officials have recently set their sights on making sure the city also has an enduring economic future.

Just two miles away to the west lie Tel Aviv and the shimmering, greenish-blue Mediterranean Sea. To the north is the Ramat Gan soccer stadium, on a tract that Bnei Brak ceded to Ramat Gan to ensure that no Shabbos soccer games would be played on Bnei Brak’s turf.

Beneath us, eighteen stories below, office workers — a mix of religious and nonreligious — are hustling along the promenades between buildings, while some sit on benches and enjoy their coffee break. The building’s occupants include Israeli construction giant Ashtrom, whose Ashdar subsidiary was one of the first contractors to build apartments in Beitar Illit; Champion Motors, Israel’s importer of Volkswagen; and the cellular phone company Pelephone, who chose the AFI-Concorde tower as its national headquarters for customer service and employee training.

Unlike most business and commercial towers worldwide, which are populated by leaseholders, it is not unusual for Israeli companies to purchase the office space they utilize.

“Some 50 to 60 percent of this building is owner-occupied,” says Mr. Ben-Avraham. “The best investment for most people, after their own business, is investing in the real estate it sits on. We have seen this proven in Israel time and again.”

The impetus for these development efforts has been powered by Bnei Brak’s mayor, Rabbi Yaakov Asher.

“I learned this city from the ground up,” he says. Mayor Asher began his political career some twenty years ago as an assistant to Bnei Brak’s deputy mayor. He soon became director and chief of staff of the mayor’s office, where he supervised Bnei Brak’s building and housing departments. “I understand buildings and construction as well as college-educated secular politicians. They’re always surprised by how much I know.”

Growth for All Ages  Mayor Asher assumed the city’s top political position in December 2008, at the peak of the global financial crisis. Bnei Brak today has an annual budget of about one billion shekels ($280 million). In 2008, the city was running a 26-million-shekel ($7.3 million) budget deficit, and its total municipal debt had risen to 286 million shekels ($75 million).

By the end of 2010, in just two years in office, Mayor Asher had engineered a financial turnaround. Bnei Brak had balanced its budget and had paid off almost two-thirds of its debt, partly due to the incoming flow of property taxes from the city’s new business towers.

Looking ahead to the future, Mayor Asher determined that Bnei Brak would benefit from initiating a separate, quasi-governmental development company that could both spearhead projects and locate funding for initiatives that could not be funded through the city’s budget alone, or that could be matched on a fifty-fifty basis.

He reached out to Rabbi Moshe Eizen, tapping him as CEO of the newly created Bnei Brak Development Fund. The Haifa-born Rabbi Eizen hails from a distinguished Yerushalmi family, His grandfather, Rav Shalom Eizen, was a dayan on the Yerushalayim beis din.

Rabbi Eizen was a Talmud Torah instructor for some twenty years before turning his talents to developing community-based Torah institutions on behalf of gedolei Yisrael.  These included work on behalf of Rav Yaakov Edelstein in Ramat HaSharon; for  Yeshivas Nachalas Moshe in Bnei Brak; and Rav Rafael Abuchatzeira, the brother of Rav Elazar Abuchatzeira ztz”l, who was murdered last month.

Rabbi Eizen is both charismatic and sincere — although he prefers to refer to himself as tenacious. He plows ahead on multiple fronts, moving projects along, and smoothing obstacles that may be strewn along the way. Projects already well underway include the six-tower BBC (Bnei Brak Business Center) development launched this past March at a news conference, attended by Bank of Israel Governor Stanley Fischer and Minister of Finance Yuval Steinitz. No other business center on that scale is currently under development anywhere else in Israel.

The Bnei Brak Development Fund is also responsible for constructing new recreational areas, including the significant expansion of Park Ayalon by extending it by ninety-nine acres into Bnei Brak.

“As of now, we don’t have an all-inclusive park for our children to go to, but eventually, with the expansion of the Ayalon Park, we will,” says Rabbi Eizen. “There will be room for bicycle trails, water activities, new, modern playground equipment, and a synagogue.”

Challenges and Opportunities  In addition to his skills in business development, Rabbi Eizen doubles as our tour guide on this sleepy, bein hazmanim summer morning in Bnei Brak. For those who either live there, or at least occasionally experience the hustle and bustle of Bnei Brak at one of its many nighttime chasunahs, the contrast is both noticeable and agreeable.

Construction sites, however, are always noisy, and the one Rabbi Eizen takes us to is no exception. The exterior frames for more than 250 apartments are rising at a six-building complex near the famous Itzkowitz shtiebel, where one can bump into people looking for a Maariv minyan following an all-night chasunah alongside those headed for a vasikin Shacharis minyan. Since Bnei Brak rabbanim do not endorse the use of Shabbos elevators, seven stories is the maximum height for Bnei Brak housing projects. [Full story will appear in this week’s Mishpacha Magazine].