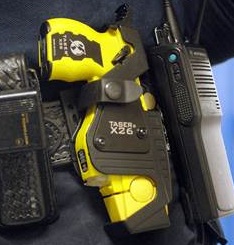 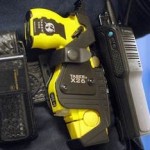 Chief Lawson says should the department decide to use the weapons, they would be required to use one of two options dictated by the Attorney General, but both options would require the tasers be equipped with video cameras, which records the officer’s actions when the weapon is removed from its holster. The video could then be viewed by superiors, monitoring its use. (Asked why they would not require standard weapons to use similar video recording equipment, despite the fact that they cause deadly force and spark many lawsuits, the Chief could not explain).

Until about a year ago, the weapons were illegal to Law Enforcement Officers, but now with the new option, many departments feel the alternative could serve them well in confrontational situations which are not an immediate danger to the officer’s life.

“It’s for situations when the threat is not imminent”, Lawson said.

The Chief says a 2010 incident where a man wielded a knife at an officer and was taken down by the officer’s vehicle, (as reported on TLS) would be a perfect example of when a taser would be used. Although in many situations the officer’s use of deadly force would be justifiable in the court of law, preserving a life would be the main priority for any department.

But before officers could use the tasers, they would be required to pass a 3-phase course, the Chief said. The course includes instruction on recognizing mental illness and dealing with EDPs (Emotionally Disturbed Persons).

If and when the Department decides to use the tasers, they would not be purchased for each officer due to budget restraints. Instead, the department would initially purchase 3-4 pieces to be used by one of several trained officers on each shift. The price of the weapons is approximately $2,000 – $2,500, Lawson says.

The Chief said the department could begin using the weapons by the end of this year. TLS.