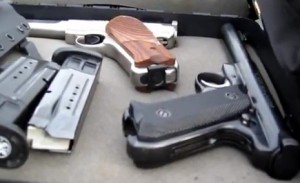 A Lakewood man was arrested after a traffic stop during which police discovered a lot more than just a driving infraction. Howell Police Patrolman Nicholas Bondarew conducted a motor vehicle stop on a Nissan Altima on Rt.9, in the Freewood Acres section of the township on October 9, and subsequent to the motor vehicle stop, a consent search of the vehicle was authorized by the driver, Michael K. Jones Jr. of Lakewood.

The search of the vehicle resulted in Ptl. Bondarew locating a loaded .40 caliber handgun, marijuana, drug paraphernalia, and over $2,000 in cash.

The handgun was fully loaded with “hollow point” ammunition as well, police said.