“Lakewood Comes Together” in Aftermath of Tragic Fire (VIDEO) 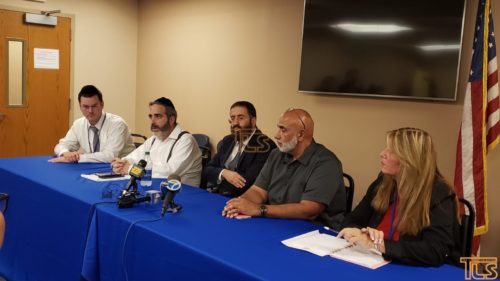 The recent inferno that destroyed a large swath of the High Point apartment complex—combined with the community wide response to that tragedy—truly puts a modern-day face on the famous Charles Dickens quote, “It was the best of times, it was the worst of times.”

The long-term-impact of having at least three residents hospitalized and sixteen housing-units devastated (with one of those wrecked units belonging to a childhood friend of this writer) has yet to be fully assessed. More obvious, however, is that that residents from across Lakewood Township—whether Black, White, Latino or Chicano, no matter if Jewish, Christian or from any of the multitudinous other faiths represented in this city—have come together to support those in need.

And as we found out on Monday at the Board of Education office of the Lakewood Public School District, this response is just the beginning of a recovery for those directly affected.

During a press conference led by Board attorney Michael Inzelbuch and attended by several people who have been left homeless as well as relatives of victims still hospitalized as a result of the fire, one additional consideration became evident: much more remains to be done—and is indeed being done.

Multi-agency and community efforts to contend with the trauma of the High Point disaster range are diverse. Efforts involve a wide range of individuals and organizations. Some are providing food and shelter. Others are involved in the collection and distribution of replacement clothing and household items to victims.

Still others, including employees and alumni of the Lakewood School District, assisted in buying and disseminating necessities the morning of the September 3 conflagration. Mr. Inzelbuch arrived on the scene, for example, and arranged for the provision of coffee and donuts to firefighters and other first responders. Jen Patella, Oak Street librarian, drove to Wal-Mart that morning and returned to the scene with various necessities for residents. Brenda Douglas, Lakewood Middle School special-education teacher, similarly has been lending a hand. The Lakewood Policemen’s Benevolent Association, which has many members who are LHS alumni, likewise has gotten involved in relief efforts.

Ray Cherboni of the Lakewood Civilian Safety Watch is helping to lead a collection-drive seeking to gather necessities for displaced and affected High Point families.

Cherboni, an LHS Class of 2008 alumnus and manager of the Mr. Tire automotive store in Lakewood, said donations of food, clothing, furniture and other household goods can be dropped off at his shop, which is located at 2023 Madison Ave. The facility is open 7:30 a.m.-7 p.m. Monday through Saturday and from 9 a.m.-5 p.m. on Sunday.

Cherboni lauded his fellow Lakewood residents for the outpouring of support already received in this initiative.

“Lakewood comes together,” Cherboni said, pointing out that the endeavor “filled a 26-foot truck immediately.”

Sally Castellano, District Child Study Team (CST) member, has played and continues to play a role in providing “trauma-focused therapy” to some of the estimated 15-20 public school students who live—or used to live—in the High Point complex.

The Monmouth University educated Castellano—who formerly worked for the Division of Family and Youth Services—said at the press conference that children she has treated for separation anxiety and other ailments already are making progress. Whereas some of the students, who range from pre-school age to high schoolers, initially suffered from insomnia, several now are “able to sleep and are feeling better,” she said.

Other initiatives have been led by the international organization Chai Lifeline, which has provided guidance to the District on how school workers can best help students suffering from the trauma of the destructive fire and subsequent displacement it has caused.

Indeed, on Monday morning Superintendent Laura Winters district-wide had disseminated Chai Lifeline pamphlets to employees. Guides given to school workers include titles such as “Helping Preschoolers in the Wake of Trauma,” “Help for Parents after Tragedy,” “Crisis Guidelines for Teachers and Parents” and “Children and Trauma.” Mr. Inzelbuch added that Spanish-language translations of the guides are in the works.

Rabbi Sruli Fried, Chai Lifeline Regional Director-NJ & PA, said at the press conference that “as someone born and bred in Lakewood,” it is heartening to witness how “the DNA of Lakewood comes together… It’s really remarkable to see how Lakewood unites in time of tragedy.”

Though they kept their responses to a minimum, several High Point residents and the relatives of three burn victims were likewise in attendance.

One woman, whose name was not disclosed, briefly explained that her son, daughter-in-law and a grandchild were burned during the tragic blaze.

“I just want to say thank you for everything,” she said before ending her brief exchange with the audience and media, clearly distraught and unable to continue.

Rabbi Kaszirer, representative of the social-services organization Bikur Cholim, pointed out that the group has helped to arrange transportation and lodging for that particular family and for the relatives who are providing support and visitation. Mr. Inzelbuch noted that those victims are being treated at burn center in Livingston, N.J.

One other family displace by the fire—who are currently staying with relatives—said through a translator that they must relocate to Toms River. A man identified as the father of that family said, according to a translation through Ms. Castellano, that he was thankful for all the help from the community.” He expressed particular thanks to the District superintendent and principals and teachers from the Lakewood school system.
“Thank you so, so much,” he added slowly in English without assistance.

The District will continue to provide transportation to the family’s school-age children to get them from Toms River to their current schools in Lakewood, as required by law, Mr. Inzelbuch noted.

One remaining problem for some High Point residents is that in the days before the fire they had paid the rent—for apartments that they are now unable to occupy. Some have lost all receipts and paperwork documenting their leases and their payments, and as a result some do not know to whom they should direct their requests to have their payments returned. Without that money, it will be difficult to relocate to another dwelling.

Mr. Inzelbuch noted that he intends to contact the Lakewood mayor and deputy mayor to obtain assistance for such residents who need such documents and information about their rental units.

One LHS student identified only as Alejandra said “I tried to reach out my landlord and they have not responded.” She knows of other High Point residents in a similar predicament. “Many paid their rent the night before [the fire].”

“Everyone is scrambling for a place to live,” Alejandra added.