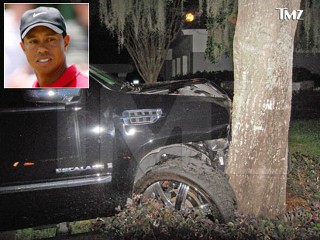 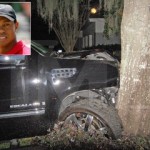 Kars4Kids has put in a plea to Tiger Woods asking him for his recently crashed vehicle. If the national car-donation organization receives it, its resale, they explain, will benefit a great many children. “This is all about turning a negative into a positive,” said Clifford Smith, spokesman for Kars4Kids. “No one looks forward to the possibility of an automobile accident, but a car crash for a celebrity of Tiger Woods’ stature has additional ramifications—not the least of which is a slew of negative attention from the press. But by donating his wrecked car to charity, Mr. Woods can take this lemon of a situation and turn it into lemonade.”
Woods, 33, crashed his 2009 Cadillac Escalade on November 27, according to a call report compiled by the Orange County Sheriff’s Office. The automobile suffered between $5,000 and $8,000 worth of damage to the front bumper and grille, according to various sources.

Kars 4 Kids, which frequently receives automobiles following auto accidents, contacted the office of Woods’ agent, Mark Steinberg at IMG in Cleveland, Ohio, to explain just how much good the celebrity’s auto donation would do for the organization. Regardless of the condition of any vehicle, or how low its value is, the organization puts the donations to good use.

“It’s not the original Batmobile or the DeLorean from ‘Back to the Future’ but Tiger Woods’ Cadillac would bring in a fair dollar in auction,” said Smith. “We would then use those proceeds to fund important programs.”

Kars4Kids is a national car donation program providing for the spiritual, emotional and practical needs of children from impoverished or dysfunctional families. The registered, national 501(c)(3) non-profit organization was established in 2000. The organization’s primary focus is on children who, without intervention, are at high risk to experience failure, social challenges, depression and other factors that lead to anti-social, self-destructive behavior. PRW.