Join For Maseches Taanis! Short Machshava On The Daf By Rabbi Yechezkel Hartman! 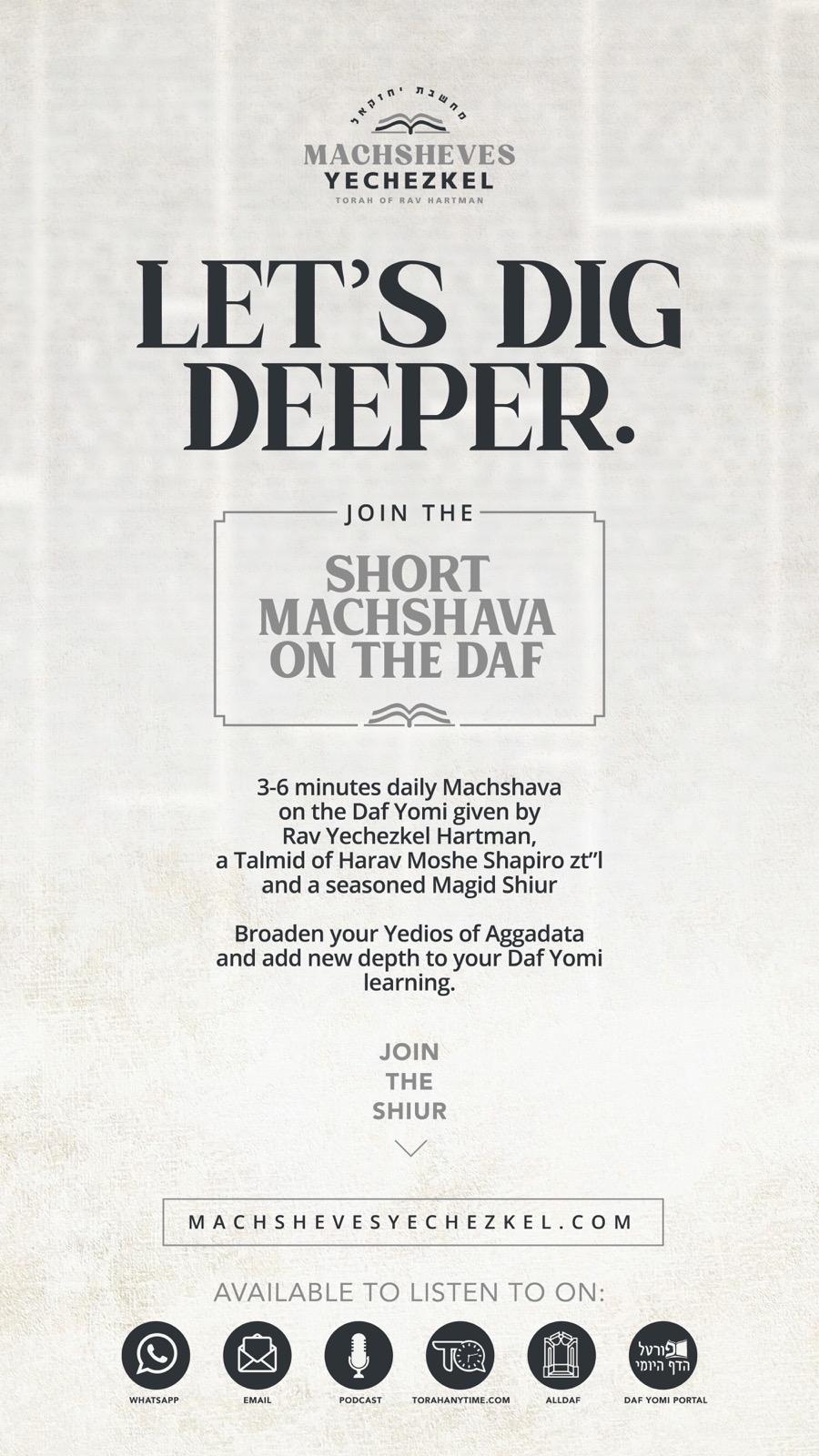 The Short Machshava Shiur aims to give an understanding of the Agadita/Machshava of each Daf, adding a new Depth to the Daf. Available on machshevesyechezkel.com, Torahanytime, All Daf, as well as all major podcast platforms.

Given by Rabbi Yechezkel Hartman, a Talmid of Rabbi Moshe Shapiro zt”l, and a Maggid Shiur in Lawrence NY.

1. Who is Rabbi Hartman and What Is Short Machshava / Machsheves Yechezkel?

I grew up in Eretz Yisrael. My father is Rav Yehoshua Hartman, the author of the new Maharal series (Blue – Machon Yerushalayim). At a young age my father introduced me to Hagaon Rav Moshe Shapiro zt”l, who was a giant in every part of Torah, but he specifically opened the depth of Agadita to the world. Growing in a home of Maharal, and learning from a Rebbi who emphasized the importance of learning Agadita, exposed me to the appreciation of what’s called today: “Machshava”.

In addition, my Rebbi instilled in me the importance of preparing and giving Shiurim. I started giving 15 years ago a weekly Machshava Shiur on Parsha/Inyonei Deyoma. 13 years ago I started giving my daily Daf Yomi, and as the years passed added more Shiurim in Halacha, Machshava and Parsha. A few years ago torahanytime.com was kind enough to add my Shiurim to their platform giving me the Zechus to be able to expand my Harbatzas Hatorah.

In the past year and a half, with guidance from R’ Moshe Schwerd from AllDaf, I developed the Short Machshava Daily Shiur on the Daf, which brings together both the Daf and the learning of Agadita. The shiur BH became popular and I have the Zechus and honor to interact daily with several Talmidei Chochomim and learners on topics of Machshava related to the Daf.

MachshevesYechezkel.com is the concept of R’ Zevi Kaufman (CedarMediaStudios) , a place where all Rav Hartman’s  Shiurim can be easily accessible.

2. What is Short Machshava on the Daf?

The Short Machshava Shiur tries to discover, discuss in short, and give an understanding of the Agadita/Machshava of each Daf.

In Dafim where there is a lot of Agadita, the job description is simple: Try to determine which subject is the most essential and connected to the Masechta/Sugya. Then try to select one Hesber that gives a taste of the depth of Agadita in a few minutes.

The challenge is in Dafim where there is no Agadita, there we try and find a layer of Machshava understanding which is essentially connected to one Halacha piece. Sometimes the point is related to the structure of the Lashon of the Gemara, or is something that explains a difficult concept in the Rishonim.

As the Seforim explain, every part of Shas has layers of Machshava/Kabbalah to it, and in two years that the shiur is going on, I saw tremendous Siyata Dishmaya in finding deep and well-connected ideas in each Daf that we learned.

3. Why is understanding Aggada important?

As my Rebbi Rav Moshe Shapiro zt”l taught us: Every statement of Chazal has infinite depth to it. And if in Halacha one must do his best to dig as deep as possible to understand a Sugya, in Agadita one must do it  even more so, as under the surface of Agadita there are all the Sodos of Torah that need to be explored, and without some explanation one doesn’t even touch the surface of these jewels.

4. Where are these divrei Torah coming from & is there a specific approach that is employed in the making of a Short Machshava?

The Divrei Torah are based on several sources, starting with the classic Agadita Mefarshim on Shas, such as the Maharsha, Maharal’s Chidushei Agados, the Mefarshim around the Ein Yakov and the Ben Yehoyadah. Then the other fundamental resources of Agadata from elsewhere, including Chazal in the Midrashim and Zohar, Arizal, Maharal, Ramchal, Megale Amukos, the Vilna Gaon and Baal HaTanya, and ending with the later Litvish and Chasidish pillars who gave us a taste of understanding of Agadita, such as: The Netziv, the Malbim, Meshech Chochmo, Bnei Yisaschar, Rabbi Tzadok, Sfas Emes etc. And of course, I always try to include what I heard from my Rebbi Rav Moshe Shapiro zt”l.

Join in and begin to dig deeper!