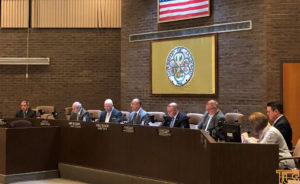 As was recently reported on TLS, disturbing audio of Jackson Council President Rob Nixon has recently emerged in which he told a Jackson resident complaining of the town’s changing demographics that he is in full agreement with him, and that he had several ideas on how to “attack” the matter. During that monologue, Nixon also told the resident that in multiple instances Jackson’s attorney had to “reel him back in” because his proposals on “dealing” with the Jewish community were illegal and unconstitutional. In other words, Nixon would like to impose ordinances which would debilitate the Jewish community, but is legally constrained from doing so. He said that he would rather discuss his ideas with the resident “off the mic”, presumably because he knew his ideas were drastic, illegal, and bound to cause an uproar.

During a meeting last night, instead of walking back his comments, Nixon chose to double down. He attacked those who called him out as intentionally misinterpreting his words, claiming that he was discussing solutions regarding real estate matters, and not the Jewish community per se.

This raises the obvious question: if Nixon were truly discussing solutions to real estate issues, why did he feel the need to talk with the resident “off the mic”? The implications of that is there was something darker going on. No public servant feels the need to speak off the record when discussing the best way to enforce, modify, or update real estate zoning ordinances. What real estate related proposals can be so sensitive that you would need an “off the mic” conversation? What ideas relating to real estate can be so legally questionable that Jackson’s attorney felt the need to “reel him back in”?

Secondly, the resident who brought up the question was complaining of Jews moving into Jackson. Nixon was clearly responding to his question directly by addressing the “issue” of having a growing Jewish community in Jackson, and how he came up with ideas to deal with it. Nixon spoke of driving through the Brookwood area, far from his own home, to look around at the areas where Jews were moving in. Does this sound like someone who was just discussing real estate solutions?

It is quite disheartening that a politician as powerful as Nixon is could be so two-faced. When speaking to ‘Jackson Strong’ residents he tells them he will “attack”; when talking with the Jewish community he professes himself to be a champion of dialogue and reconciliation. It is no mistake – Nixon is a seasoned politician, well-versed in doubletalk and pandering.

It is difficult to argue that when Nixon was speaking to the complaining resident that he was simply hearing him out, because if so, there would have never been backroom ideas that he had which the town’s attorney would have to “reel him back in” from. It is apparent that Nixon is more interested in claiming to be a supporter of Jews and their rights than acting as such in his actions.

His words and deeds show him in a bad light, and it is remarkable that UPenn and the PBA continue to employ him as a professor and lobbyist, respectively.