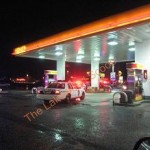 (PHOTO) Lakewood and Howell PD have just released three males at the Shell gas station after being questioned about an armed robbery in Howell a short time ago. Lakewood Police were notified of an armed robbery at a Howell gas station and pulled over the car moments later at the Lakewood station at Madison and Kennedy. The three questioned were then released. It is unclear at this time if the suspects or suspects made away with any cash.