How Running Jogs Your Memory By Creating New Brain Cells 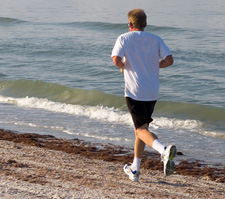 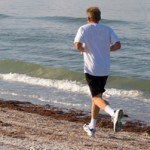 We all know running is good for your body. But it can also do wonders for the mind, according to Cambridge University scientists. A regular jog leads to the growth of new cells in the area of the brain which boosts your memory, a study has found. It is not clear why aerobic exercise triggers the growth of grey matter (known as neurogenesis) but it may be linked to increased blood flow or higher levels of hormones that are released while exercising. Timothy Bussey a behavioural neuroscientist at Cambridge and a senior author on the study said the team studied two groups of mice, one which had umlimited access to a running wheel while the other did not.

After a few days left alone, they put both groups of mice through a series of memory tests on a computer screen. It displayed two identical squares side by side, and if they nudged the one on the left with their nose they received a sugar pellet reward, while the one on the right yielded nothing.

The mice who had been running were almost twice as successful as those in the control group at picking the correct square.

At the start of the test, the squares were 30cm apart, but got closer and closer together until they were almost touching.

This part of the experiment was designed to test how good the mice were at separating two very similar memories. The human equivalent could be remembering what a person had for dinner yesterday and the day before, or where they parked on different trips to the supermarket.

The greatest improvement was seen in the later stages of the experiment, when the two squares were so close they nearly touched, according to a report in the Proceedings of the National Academy of Sciences.

The sedentary mice got steadily worse at the test because their memories became too similar to separate.

M Bussey told the Guardian: ‘At this stage of the experiment, the two memories the mice are forming of the squares are very similar. It is when they have to distinguish between the two that these new brain cells really make a difference.’
He added: ‘We know exercise can be good for healthy brain function, but this work provides us with a mechanism for the effect.’

The scientists also tried to wrongfoot the mice by switching the square that produced a food reward but the running mice were quicker to catch on when scientists changed them around.

The running mice clocked up an average of 15 miles (24km) a day.

Brain tissue taken from the rodents showed that the running mice had grown fresh grey matter during the experiment.

Tissue samples from the dentate gyrus part of the brain, one of the few regions of the adult brain which can grow new cells, revealed on average 6,000 new brain cells had been created.

Previous studies on people with depression have found their symptoms can improve if they exercise regularly. Some antidepressant drugs work by encouraging the growth of new brain cells.

It is also thought exercise might also reduce stress, which inhibits new brain cells through a hormone called cortisol.

The Cambridge researchers joined forces with colleagues at the US National Institute on Ageing in Maryland to investigate the effect of running.A few days of running led to the growth of hundreds of thousands of new brain cells that improved the ability to recall memories without confusing them, a skill that is crucial for learning and other cognitive tasks, researchers said.

Many great minds have said they enjoy a jog. Nobel Prize winning Physicist Wolfgang Ketterle has said: ‘When I run, I think about everything: physics, family problems, plans for the weekend. I haven’t made any big discoveries on a run, but it does give me time to think through problems. Some solutions are obvious, but they are only obvious when you are relaxed enough to find them.’ APP